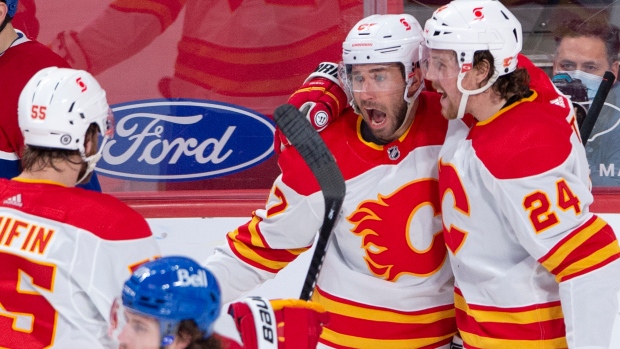 The Calgary Flames have life in the North Division.

While they are still on the outside looking in, the Flames have an opportunity to make the race for the final playoff spot in the all-Canadian division very interesting over the next month.

Calgary beat the Montreal Canadiens 4-1 on Wednesday night for its third straight win.

An afterthought after they dropped eight of nine from mid-March into early April, the Flames have outscored their opponents a combined 12-3 while stringing together wins over the Edmonton Oilers, Toronto Maple Leafs and Canadiens.

As I highlighted in Wednesday’s column, Calgary still has four more games to go against the team they are right behind in the standings in Montreal.

Now four points back with three more games played than the Habs, the Flames are obviously still a long shot to make the postseason.

Still, I’m not willing to completely write them off just yet.

Flames win third in a row

Jacob Markstrom made 26 saves for his third straight win on Wednesday night. Markstrom has stopped 67 of the 70 shots he has faced over that three-game win streak.

Coming up with his 2nd splendid outing in as many nights in helping his @NHLFlames grab a 4-1 defeat of the Canadiens Wednesday night, Jacob Markstrom now finds himself tied for 4th with a current goaltending peer on this all-time list of winningest goalies to come out of Sweden pic.twitter.com/d55SjzatGx

As of Wednesday morning, Calgary was 12-to-1 to make the playoffs. After last night’s win over Montreal, that number has been adjusted to 8-to-1.

It’s important to keep in mind that with the unique division structure and schedule that’s in place this season, the Flames still have four more games against the Canadiens.

Calgary is 4-1 against the Habs this season – 3-0 since head coach Darryl Sutter took over behind the bench.

“They had seven slot shots in the entire game...it was a peewee effort and a peewee performance...”@CraigJButton & @dutchysc on how the Canadiens have given the Flames oxygen: https://t.co/xHUiNVTV2p#TSNHockey pic.twitter.com/FEVbMTAQVI

The Flames and Canadiens will play again on Friday night and then have a three-game set in Calgary from April 23-26.

That series could have a playoff feel, with the Flames keeping the heat on the Habs for that fourth and final playoff spot.

Jets bounce back versus Sens

The Winnipeg Jets (-180) scored twice in the third period to spoil Matt Murray’s return in a 3-2 win over the Ottawa Senators on Wednesday night.

Laurent Brossoit stopped 27 of the 29 shots he faced to improve to 6-3-0 this season.

Winnipeg improved to 12-3-1 versus Ottawa over the past five seasons.

The Jets have won four of their past five overall, but are still five points back of the Maple Leafs for first place in the North Division.

As of this morning, Toronto is a -750 favourite to win the North Division. Winnipeg is the second choice at +800 to win the division.

Colorado Avalanche netminder Philipp Grubauer was added to the COVID list on Wednesday.

It goes without saying that the most important thing is Grubauer’s return to health, which is always the case when a player is added to the COVID list.

It’s a terrible break for Grubauer, who was the second choice to win the Vezina trophy at +230 odds behind only Andrei Vasilevskiy (-150) of the Tampa Bay Lightning.

It’s also a bad break for fantasy managers who leaned heavily on Grubauer all season but won’t have him available for the rest of the fantasy playoffs.

The recently acquired Devan Dubnyk made his Avalanche debut with 31 saves in a 4-3 win over the St. Louis Blues on Wednesday night.

If the Avalanche leans heavily on Dubnyk the rest of the way with Grubauer sidelined, he could be a league winner in fantasy.

Carlos Rodon threw the second no-hitter of the season as the Chicago White Sox blanked Cleveland 8-0.

Carlos Rodón of the @whitesox had Tommy John surgery on May 15, 2019. Tonight he threw a no-hitter.

He's the first MLB pitcher ever to throw a no-hitter within 2 years after having Tommy John surgery.

He was two outs away from a perfect game when he hit Roberto Perez with a pitch in the ninth inning.

It’s the second no-hitter in the majors over the past six days.

Tony La Russa is the 3rd manager to manage a no-hitter with 3+ franchises:

The 28-year-old lefty improved to 2-0 and has yet to allow a run in 14 innings of work this season.

His next start is April 19 against the Boston Red Sox.