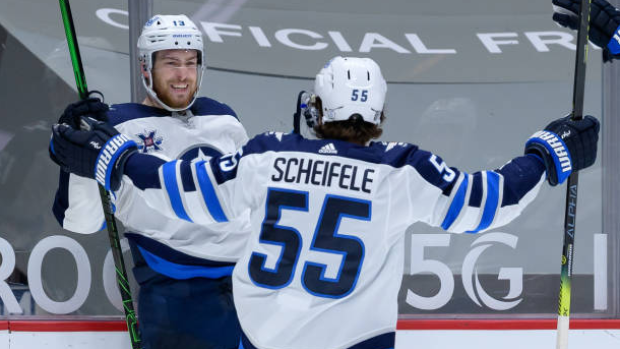 Pierre-Luc Dubois has arrived for the Winnipeg Jets.

It took a little while to get going, but once he did, Dubois and Winnipeg’s (-110) top line were able to absolutely take over in a 4-3 overtime win over the Vancouver Canucks on Sunday night.

The Jets trailed 2-0 at the midway mark against Vancouver.

Dubois got Winnipeg on the board 14:37 into the second period.

After Mark Scheifele tied it just over five minutes into the third, Dubois assisted on Neal Pionk’s power-play goal to give Winnipeg a 3-2 lead.

Elias Pettersson tied it for the Canucks with a power-play goal of his own with 38 seconds remaining in regulation, forcing overtime and setting the stage for Dubois to deliver some more magic.

Safe to say that was a successful return to the lineup for PLD! 😤 pic.twitter.com/Qp2dbAKhmn

There were plenty of unhappy Jets fans on social media after our very own Sara Orlesky confirmed that Dubois would make his return to the Jets lineup on a line with Mark Scheifele and Blake Wheeler.

Those voices echoed louder when Winnipeg fell behind 2-0 and that top line didn’t appear to have much going on. Then, the switch flipped.

It was only a matter of time before that talented combination clicked.

Credit to Paul Maurice for putting Dubois on the wing with Scheifele and Wheeler in an effort to maximize his potential in his return to the lineup.

Maurice also deserves credit for sticking with that combination long enough for them to take over the game, including going with three forwards in overtime.

In the long term, it’s only a matter of time before the 22-year-old inevitably shifts back to the centre position.

In the short term, and with the Jets fighting for a playoff position in a condensed 56-game season, it wouldn’t be a surprise if Dubois spends some more time on the wing, with Scheifele, Paul Stastny and Adam Lowry at centre.

The combination of Dubois, Scheifele and Wheeler has the potential to produce at an elite level in the North Division.

For Dubois in particular, the new role could provide a major boost to his fantasy stock for as long as it sticks.

From @mike_p_johnson: Pierre-Luc Dubois showed glimpses of what he's capable of, but still has more to give - https://t.co/PlvS1y0M1N#TSNHockey pic.twitter.com/c2MipppVhc

Here’s part of what our TSN Hockey analyst Mike Johnson had to say about Dubois’ performance after the game:

“Anytime you pick up three points, anytime you get an overtime goal, you’re doing something right. The good news is that’s three points and an overtime winner, and I still don’t think he’s fully fit and fully on top of his game. So he has more to give still for the Jets.”

While Dubois was the hero for Winnipeg, no one in the Canucks organization is safe from the wrath of hockey fans in Vancouver looking for somebody to blame for the team’s struggles.

Despite earning at least a point in four of their past five, the Canucks have just two wins in their last 11 games thanks to a six-game slide at the start of the month.

Sutter: "These moral victories, they dont count. This sucks" #Canucks

It isn’t about to get any easier for Vancouver either.

Next up for the Canucks is a two-game set against Connor McDavid and the Edmonton Oilers, a team that has won nine of its past 11 games overall.

While hockey fans in Vancouver have already hit the panic button, Habs fans are close to doing the same.

The Montreal Canadiens had an entire week to prepare for a back-to-back against the Toronto Maple Leafs and Ottawa Senators.

The Habs followed up a 5-3 loss to Toronto on Saturday night with a 3-2 overtime loss to Ottawa (+185) on Sunday night.

Johnson was pretty blunt about what went wrong for the Canadiens after their loss to the Senators:

“That was one of the worst overtime periods I’ve seen an NHL team play in quite some time.”

Montreal has now lost five of its past seven games.

Nick Suzuki had an interesting response following the loss.

#Habs Suzuki: "I think we're all pretty much up in our own heads, playing not to lose."

The fact that this game played out the way it did has to be a concern for a fan base that has become too familiar with their club playing down to the level of its competition.

Last season, it was four straight losses to a Detroit Red Wings squad that finished with the worst record in the NHL by a significant margin.

This time around, Montreal has dropped two of its first three to Ottawa.

Contributing a 1 goal-1 assist effort including an overtime marker in his @Senators victory vs the Canadiens earlier tonight, Brady Tkachuk has now recorded 9 game winning tallies in his young NHL career. That moves him into a tie behind just 3 others on this Sens franchise list pic.twitter.com/P7sERkYAFj

The concerns extend beyond losing to the Senators.

The Canadiens have been held to two goals or fewer in six of their past seven games overall.

They aren’t keeping pucks out of their net either – they’ve allowed three or more in five of their past seven.

Montreal is 4-0-1 against the Vancouver Canucks and 5-5-2 against all other opponents.

Suddenly, the same fans that were dreaming of a North Division title are wondering if things will get a lot worse before they get better for their beloved team.

Next up for the Habs is a rematch with the dreaded Senators on Tuesday night.

Homa, a Los Angeles native who fell in love with the game in part because he grew up watching The Genesis Invitational at the Riviera Country Club as a kid, beat Tony Finau in a playoff after some tense moments for Homa and anyone who bet on him.

Max Homa emotional after his win:

"Been watching this tournament my whole life. It's why I fell in love with golf ... I was too scared to talk to Tiger the other day but he's forced to talk to me now so it's gonna be pretty awesome." 😂@maxhoma23 pic.twitter.com/1BWi7kflyH

Shout out to our TSN Edge golf analyst Adam Scully, who picked Homa to pick up the outright win this week and helped convinced me to tail him.

“This week could be the week for Max Homa to pick up his second career PGA Tour victory.”

Max Homa was +5500 to win the Genesis Invitational. @adam_scully was all over him earlier in the week. #GenesisInvitational ⬇️ pic.twitter.com/h0texcWJLC

The Toronto Raptors (+130) extended their season-high win streak to four in a row with a 110-103 win over the Philadelphia 76ers on Sunday.

6 weeks ago, they had the worst record in the NBA. They're 14-7 since, with wins over Brooklyn, Milwaukee (x2) and Philly.

Toronto has cashed as an underdog in three of its past four, including a pair of wins over the Milwaukee Bucks.

The Raptors will be an underdog once again on Tuesday night when they face the 76ers in the rematch.