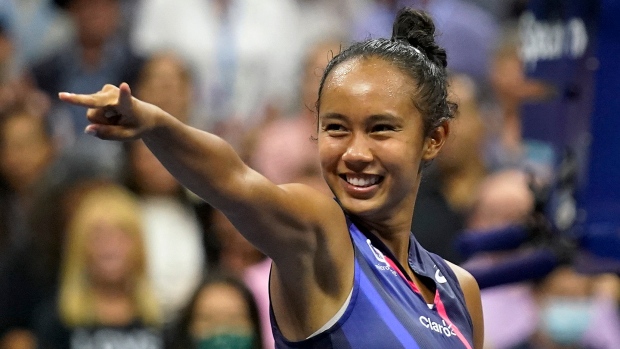 The 19-year-old has defied the odds every single step of the way.

She became just the fourth Canadian to reach a singles major final, and the first since Bianca Andreescu won the US Open in 2019.

There’s no chance you could have convinced me that I’d be watching anything other than the NFL on the opening night of the regular season, but a split screen with tennis and football was a simple compromise.

And betting on Fernandez to beat the odds again made the experience that much better.

Who saw this coming?

Fernandez, a 300-to-1 long shot to win the US Open when the tournament started, has defeated four consecutive ranked opponents en route to the final.

🇧🇾 [2] Sabalenka was leading the @WTA in wins this year

Three of those opponents were ranked in the top five.

Now the teenage star is one final upset away from a Grand Slam title.

Based on the numbers alone, Fernandez’s win over Sabalenka was only her second biggest upset of the tournament.

Leylah Annie Fernandez continued to defy the odds by defeating Aryna Sabalenka to reach the US Open final on Thursday night. It was her fourth straight upset win at +230 or longer odds. #USOpen pic.twitter.com/KMsr96PPAs

Fernandez was +300 to beat Sabalenka. She was +370 to pull off the upset when she beat Naomi Osaka in the third round.

After her remarkable run, Fernandez opened at shorter odds to win her final versus Emma Raducanu than she was listed at for any of her matches since she beat Kaia Kanepi in the second round as a -155 favourite.

The giant slayer continues!! I just finished watching @leylahfernandez knock off the number 2 player in the world to advance to the Finals!! 🔥 👏🏾

For perspective, that’s the same number that Fernandez closed at when she beat Ana Konjuh in the first round of the tournament.

🇨🇦Leylah Annie Fernandez could be found at 300-1 to win the US Open before the tournament started.

Now, they will meet in the US Open final. #USOpen https://t.co/BwmdLBI4Cv

The 19-year-old pulled off four consecutive significant upsets en route to the final.

Oddsmakers are giving her as good of a chance or better to win this match than they gave her in any match since the second round of this year’s US Open.

Meanwhile, fellow Canadian Felix Auger-Aliassime will get his chance to book a spot in the men’s final when he meets Daniil Medvedev later today.

Medvedev is an overwhelming favourite at -720. Auger-Aliassime is +500 to advance.

Whatever happens next, it’s been an incredible run for Canadians at the US Open.

If you parlayed Fernandez and the Tampa Bay Buccaneers to win the NFL opener on Thursday night, the tennis match was supposed to be the sweat.

Instead, it was the Buccaneers that went down to the wire and only narrowly pulled out the victory.

Ryan Succop made a 36-yard field goal with seven seconds left to propel Tampa Bay to a 31-29 win over the Dallas Cowboys.

NFL FOOTBALL IS BACK

Dak and Brady dueled it out on opening night that ended in a Bucs win 👏 pic.twitter.com/s8cDuoLaEQ

Tom Brady threw for 379 yards and four touchdowns as he improved to 6-0 all-time versus Dallas.

Dak Prescott and Tom Brady put on a show, throwing for a combined 782 yards and seven touchdowns. pic.twitter.com/VoPk4DnTNp

If you bet the Buccaneers on the money line, a sweetheart teaser, as your survivor pool pick or in a wins pool, you’re happy with the win.

If you bet on Tampa Bay to cover, that had to be hard to watch. Dallas covered easily as a 9.5-point underdog.

Still, if you’re a Cowboys fans, you must consider last night’s result a potential win that got away.

.@timthetatman tweeted this before the Bucs got the ball back and scored to win the game 😅 pic.twitter.com/Keq3bhWCs4

Dak Prescott threw for over 400 yards and three touchdowns. He wasn’t sacked once.

Meanwhile, the Buccaneers ran up the meter with 11 penalties for 106 yards.

Despite all of that, Dallas lost the game.

A pair of missed field goals and a missed extra point by Greg Zuerlein didn’t help, although one of those missed kicks was a 60-yard attempt before the end of the first half.

Good morning — The Dallas Cowboys have the worst record in the NFL.

Sure, if you bet on them to cover, you’re happy with the result.

But if you’re a Cowboys’ fan, that’s a tough Week 1 loss to swallow when you consider just how close they were to opening the season with an upset win on the road against the defending Super Bowl champions.

The Toronto Blue Jays are the hottest team in baseball. Their timing couldn’t be better.

This is a remarkable stat:

The Yankees were swept in 4 games by the Blue Jays & never had a lead.

They played 1,250 series of 4+ games since then & led in every one. (h/t @eliassports) pic.twitter.com/DkNvPkAlbC

Since then, the Blue Jays have won eight straight and 11 of their last 12 to climb within a half-game of the American League Wild Card.

Now they’ll travel for a four-game series against one of the worst teams in baseball in the Baltimore Orioles.

While Toronto is streaking, the Yankees are suddenly headed in the opposite direction following six straight losses.

As of this morning, the Blue Jays now have a 52.4 per cent chance to make the playoffs, according to FanGraphs.

New York is down to a 56.5 per cent chance to make the playoffs.