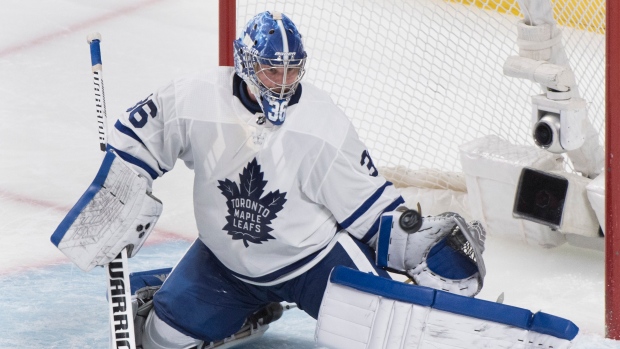 Earlier this week, our TSN Hockey analyst Mike Johnson recommended fantasy hockey managers pick up Toronto Maple Leafs goaltender Jack Campbell as an underrated option who could provide a spark both in the short and long term.

I hope you listened to him.

Campbell stopped 29 of the 31 shots he faced as the Maple Leafs beat the Ottawa Senators 3-2 on Thursday night.

With the win, Campbell improved to 5-0 with a 1.18 goals-against average and a .958 save percentage this season.

He could be a difference maker for fantasy hockey teams down the stretch.

With Frederik Andersen injured and Campbell playing at such a high level, the latter’s stock has soared over the past week.

Campbell is rostered in each of my leagues, but is somehow still available in almost 40 per cent of leagues overall.

Another notable trend to keep an eye on from a betting perspective is tracking the under in Campbell’s starts.

With Campbell between the pipes, the under is 5-0 this season.

The 29-year-old already has a pair of shutouts and he has yet to allow more than two goals in a start this season, meaning that he’s also held each of his five opponents under their team totals as well.

Stopping 29 of 31 shots in his team's 3-2 overtime defeat of the Senators earlier on tonight, Jack Campbell has stretched a personal winning streak to 5 games to start his 2020-21. As this shows, just 3 goalies in @MapleLeafs franchise history have begun a season with longer ones pic.twitter.com/aLbeTJNbW1

Toronto is set for a two-game series with the Edmonton Oilers with games on Saturday and Monday, which means that in order for those trends to continue Campbell will need to shut the door on two of the league’s best in Connor McDavid and Leon Draisaitl.

The last time the Maple Leafs and Oilers were set to meet, I discussed the idea that Edmonton could make the race for first in the North Division interesting with a strong performance in the series.

It didn’t happen. Toronto swept the three-game set versus Edmonton, outscoring them 13-1.

However, the Maple Leafs are just 3-6-0 since that series, which has allowed the Oilers and Winnipeg Jets to close the gap on top spot in the division standings.

Will Edmonton capitalize on the opportunity this time around?

As I mentioned the other day in this column, Toronto is still the heavy favourite to win the North Division at -190 odds.

While the Oilers and Jets are just two points back of the Maple Leafs for top spot, the betting odds to win the division might surprise you.

Somehow, the Montreal Canadiens join Edmonton as the second choices with both of those teams listed at +475 to win the division. Winnipeg is currently the fourth choice at +500.

As I’ve said over and over this season, the Jets continue to be disrespected by the oddsmakers.

At that number, I’m very interested to see what’s next for Winnipeg heading into a three-game set with a Calgary Flames side that has struggled as of late.

For all of the hype leading into the NBA trade deadline, there really wasn’t very much to be excited about.

In terms of impacting the NBA futures market, the Denver Nuggets went from 25/1 to 20/1 to win the NBA title after acquiring Aaron Gordon and JaVale McGee.

Denver is still the fourth choice to win it all out of the Western Conference behind the Los Angeles Lakers (+280), Los Angeles Clippers (+550) and the Utah Jazz (+900).

The Miami Heat also received a small bump in the NBA championship futures market after trading for Victor Oladipo, moving from 35/1 to 30/1 odds.

From @JLew1050 & @RodSmithTSN: Assessing a busy trade deadline - the deals that did and didn’t get done - for the Toronto Raptors - https://t.co/UcA3tn6yAp#NBA | #NBATradeDeadline pic.twitter.com/20mPZLJLF6

Meanwhile, the Norm Powell trade wasn’t enough to move the needle for the Portland Trail Blazers. They remain a 60/1 long shot to win the title.

The biggest surprise was the trade that didn’t happen with Kyle Lowry staying put in Toronto.

The Raptors, which were listed at -750 odds to make the playoffs heading into the All-Star break, are currently 11th in the Eastern Conference standings.