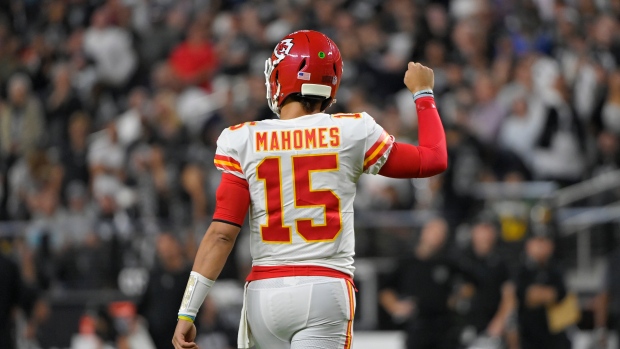 A lot of people waited a long time for the Kansas City Chiefs offence to look the way it did on Sunday Night Football.

If you’ve been riding with them all season, I hope you didn’t pick last night to jump off the train.

Patrick Mahomes went 35-of-50 for 406 yards and five touchdowns as the Chiefs beat up the rival Las Vegas Raiders 41-14.

It was the first time Kansas City has covered the spread against an opponent with a winning record this season.

After a chaotic couple of weeks in the NFL, favourites went 7-4-1 straight up on Sunday.

However, underdogs still led 7-5 against the spread, including a couple more notable upsets.

Heading into Sunday Night Football, Kansas City had failed to cover the spread in all six of their games against opponents with a winning record.

The Chiefs were a three-point favourite, which marked the second fewest points they had been favoured by in a game this season, behind a 38-20 loss to the Buffalo Bills as a 2.5-point favourite back in Week 5.

That set the table for an interesting decision.

Do you lay the points with the more talented team knowing that you would be buying Kansas City stock at its lowest?

Or do you take the field goal with a Raiders’ side that had been the better team to that point in the season?

Anyone who took the points with Las Vegas was in for quite a show. Mahomes threw for more than 400 yards and five scores.

Travis Kelce led all receivers with 119 receiving yards tonight, primarily producing on targets closer to the line of scrimmage.

The Chiefs outgained the Raiders 516-299 in total yards. They also won the turnover battle 2-1.

LEAVING VEGAS WITH THE W 🥳 pic.twitter.com/fTIRM0AGSo

It was the type of statement win that some felt Kansas City would inevitably deliver, while others started to wonder whether it would ever happen.

After half of a season where the Chiefs defense was called the worst in football and the Chiefs offense had its worst month since Mahomes was drafted, here’s the complete list of AFC teams that have more wins than the Chiefs:

In terms of futures, we saw a small adjustment this morning, with the Chiefs dropping from +1200 to +1000 to win the Super Bowl.

Patrick Mahomes is 11-0 in road division games in his career. Only Joe Montana (20 straight) and Peyton Manning (12 straight) had longer road division win streaks since the 1970 merger. pic.twitter.com/2iH94pSDav

While he’s still a long shot, Mahomes went from 80-to-1 to win NFL regular-season MVP to 20-to-1 with one win. That’s a remarkable move after one very impressive win.

Next up for the Chiefs - a Week 11 showdown with the Dallas Cowboys before their bye week.

As of this morning, Kansas City is a 1.5-point favourite for that highly anticipated showdown.

Remember when Mike White led the New York Jets to a 34-31 win over the Cincinnati Bengals as an 11-point underdog back in Week 8?

At the time, it was the biggest upset of the NFL season.

After that stunning result, I emailed my co-workers an updated list of the biggest upsets in the NFL to that point in the season.

That list has been updated more than a few times in the 15 days since.

Sunday’s update was provided by the Washington Football Team, which beat the Tampa Bay Buccaneers 29-19 as a 9.5-point underdog.

It’s the fourth-biggest upset so far this season.

Through the first seven weeks of the season, there wasn’t a single upset by an underdog of more than seven points. We’ve had six of them since Week 8.

Over the last three weeks...

The Carolina Panthers only narrowly missed that list after closing as a seven-point underdog in a 34-10 win over the Arizona Cardinals.

Meanwhile, the Detroit Lions didn’t even need to win to pull off the most memorable result from Sunday.

The Lions are undefeated in November

The Lions tied the Pittsburgh Steelers 16-16, which is a loss for anyone who took Pittsburgh in Survivor Pools, against the spread, or in a teaser.

It’s also a loss for anybody that bet on Detroit to go 0-17.

NFL underdogs went 7-5 ATS on Sunday and are now covering the spread in just over 58 per cent of games this season.

Again notching a shutout in their defeat of the Senators on Sunday evening, the @NHLFlames have won 8 of their 15 games so far in 2021-22 with 5 of them being via shutout. That ties 3 other teams for the most on this list dating back to the NHL instituting the red line (1943-44) pic.twitter.com/w4Sd0EeQ1u

All things considered, I’m somewhat surprised the numbers for Senators’ games haven’t been even more inflated.

Leon Draisaitl led the way with a goal and two assists. Connor McDavid had a goal and an assist.

“Your game is among the best of all-time - just keep playing…”@CraigJButton implores Connor McDavid not to change his game as he reaches 600 career #NHL points: https://t.co/jovoTIdjIt#TSNHockey pic.twitter.com/hB5BvcvqGV

The Boston Bruins (-245) handed the Montreal Canadiens their fifth loss in six games.

“The blueline continues to be a significant work in progress…”@CraigJButton & @TSNJFranklin on the #Canucks' defensive woes at the centre of their frustrating struggles: https://t.co/Cepy0MY41f#TSNHockey pic.twitter.com/Weo3B4eRJs

Vancouver as now lost four in a row, giving up 22 goals in those games.