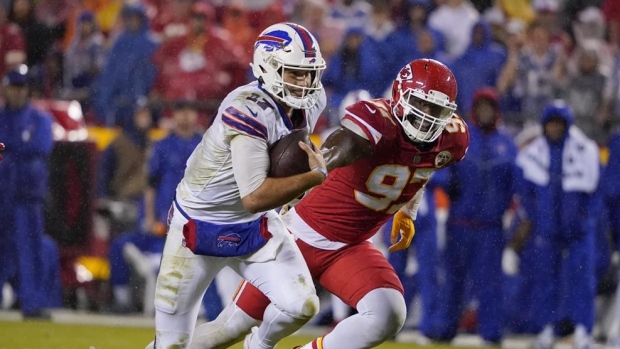 The NFL’s divisional-round matchups are set.

The Los Angeles Rams dominated the Arizona Cardinals 34-11 as a three-point favourite to wrap up the super wild-card weekend.

They’ll move on to face Tom Brady and the Tampa Bay Buccaneers next Sunday afternoon.

It was the third blowout in six wild-card round games, as the favourites went 5-1 straight up and against the spread.

It was a particularly bad night for yours truly, as well as everyone else who took the points with an Arizona team that started the season 7-0 and went out with a whimper, losing five of its final six games including last night’s no-show.

As somebody who bet on Kyler Murray to go over on his passing yards and rushing yards props, last night’s game was particularly ugly to watch.

Murray completed just two of his first 10 pass attempts that travelled beyond the line of scrimmage, as the Cardinals averaged an awful 1.5 yards per play in the first half.

Murray, who was the betting favourite to win NFL regular season MVP through the first four weeks of the season, went 19-of-34 for 137 yards with two interceptions, including a pick-six.

Meanwhile, after rushing for 35 yards or more in each of their final three regular-season games and five of their final six games, Murray finished with six rushing yards on two attempts.

Murray to go under 252.5 passing yards, under 23.5 completions, under 40.5 rushing yards, under 6.5 rush attempts, under 1.5 touchdown passes, and Murray to throw an interception all cashed.

in kyler murray’s last drive he didn’t make it to midfield and threw a pick and his passer rating almost quadrupled pic.twitter.com/54HGYtOnm3

After the way that Arizona melted down in that first half, and in the second half of the season for the second year in a row, I’m very interested to see how the franchise addresses its issues in the off-season.

Meanwhile for the Rams, Odell Beckham Jr. delivered in his first playoff game since 2017.

Odell Beckham Jr. is the first player in NFL postseason history to have a 30-yard reception AND a 30-yard completion in the same game. pic.twitter.com/s4z1Dpdm0o

Beckham opened the scoring with his first-ever playoff touchdown.

Odell Beckham Jr.’s big night is helping the Rams and his own wallet: OBJ earns a $500K incentive with a win tonight…

At one point, Beckham had more passing yards than Murray (40-28) after a trick play 40-yard completion.

Matthew Stafford was an efficient 13-of-17 for 202 yards and two touchdowns for the first playoff win of his career.

Almost 13 years in the making.

Per NFL Next Gen Stats, he threw only one pass into a tight window, which is to any receiver with one yard or fewer of separation.

The Rams have won six of their past seven games heading into next week’s showdown with the Buccaneers – their lone loss was in overtime against the San Francisco 49ers in Week 18.

Onto to the next. pic.twitter.com/fJ6rUQ8Q1a

After the favourites went 5-1 in the super wild-card round, it will be very interesting to see whether that trend continues in the divisional round.

Let’s take a closer look at those divisional round lines as we look to turn the page on Monday night’s debacle.

The Rams opened as a three-point road underdog at the Buccaneers. The total is 48.5.

Brady has won nine straight divisional-round starts, the longest win streak by any quarterback in a single round in NFL playoff history.

However, the Buccaneers will also have to buck a notable trend for defending champions.

Per ESPN Stats & Info, Tampa Bay is the 11th defending Super Bowl champion to play in the wild-card round.

None of the previous 10 made it past the divisional round.

Can Brady and the Buccaneers snap that drought? Or will we see Stafford and the Rams in the NFC Championship Game?

Meanwhile, the Kansas City Chiefs remain a 2.5-point favourite against the Buffalo Bills in the most highly anticipated game of the divisional round.

The forecast is currently calling for clear conditions, and if that holds up, I think the total for this game could climb even higher.

This has never made more sense. WINTER IS COMING!! It doesn’t matter who we face. The @KingHenry_2 is coming and I couldn’t be more excited!! I’m ready to #TitanUp I’ll be cheering our @Titans on from Ontario Canada. Where will you be cheering? Don’t forget #HeyHeyHey 😂 pic.twitter.com/2sceCCVRoH

Meanwhile, the Tennessee Titans are up from -3 to -3.5 against the Cincinnati Bengals.

Derrick Henry is expected to return for the Titans this week, and with some notable injuries in the Cincinnati front seven, it will be interesting to see how Henry performs in his return.

Mike Vrabel says the #Titans    will continue to get Derrick Henry out there to get used to running and seeing the plays. But regardless of who is in there at RB they plan to run the ball because that's who they are.

While Henry will be in the spotlight, I think it’s also notable that Ryan Tannehill will have a healthy A.J. Brown and Julio Jones.

Tennessee will run the football with Henry, and that will only open things up for Tannehill to have more room to operate through the air with his top playmakers at receiver.

Finally, the Green Bay Packers are a 5.5-point favourite against the San Francisco 49ers, the lone wild-card round underdog to advance.

Aaron Rodgers has never beat the 49ers in his playoff career – he’s 0-3.

The Packers should be a popular public team, so it will be interesting to see what happens if this line gets to -6.