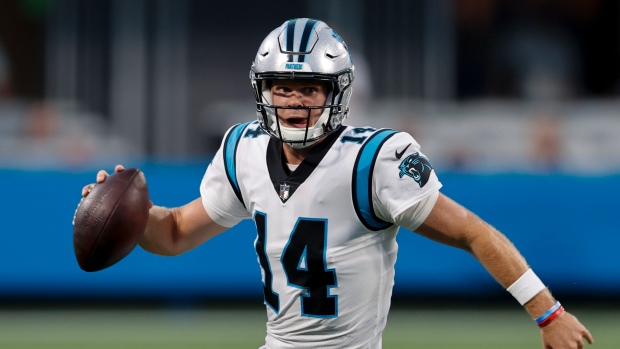 The Carolina Panthers are +700 to be the last remaining undefeated team in the NFL this season.

No one will be surprised if they’re still perfect after Thursday Night Football.

For the first time ever, the Panthers are first in the Football Outsiders DVOA ratings this week.

While it’s only two games, Carolina has looked impressive on both sides of the football in its back-to-back wins over the New York Jets and New Orleans Saints.

Plus, it’s important to keep in mind that DVOA does account for opponents played.

Tonight, the Panthers visit a team that many expected to be one of the worst in the NFL this season in the Houston Texans.

With Houston down to its third-string QB, the number for tonight’s game has already moved significantly as bettors line up to put their money on Carolina.

The early line for Thursday Night Football had the Panthers as a 3.5-point road favourite.

After an injury to Houston quarterback Tyrod Taylor, that number was adjusted to -7 for the opening line with rookie Davis Mills expected to start on a short week for the Texans.

A combination of public and sharp money pushed that number all the way to Carolina -8.5, although you could still find -7.5 and -8 at some spots.

For the first time ever in franchise history, the #Panthers rank number 1️⃣ in our DVOA Ratings!

Read what this means for Carolina and more observations from @FO_ASchatz ▶️ https://t.co/G9tS0Y2tIN#NFL #KeepPounding pic.twitter.com/FjMOtmLmTf

That means it’s last call for anybody interested in teasing the Panthers down through the key numbers in seven and three to a pick’em.

I jumped on Carolina earlier in the week and there’s nothing I’ve seen that makes me regret that decision.

While I locked in a teaser with the Panthers and Arizona Cardinals earlier in the week, I’m still comfortable with giving it now as an official TSN Edge recommendation.

A two-team, seven-point tease gets you Carolina and Arizona to win at -150.

You could get the 6.5 at -135, but I have no problem laying the juice with those two teams to win outright.

In terms of the bigger picture, the Panthers opened the season at +1200 to win the NFC South. They’re now +500 to finish first in the division.

Circling back to the last remaining undefeated team prop, I’m at least intrigued by Carolina at +700.

The Buccaneers and Rams are two of the top three choices to be the last remaining undefeated team in the #NFL this season. Tampa Bay and Los Angeles will meet at SoFi Stadium on Sunday. #GoBucs #RamsHouse pic.twitter.com/FaoWs3r9Hr

The Tampa Bay Buccaneers and Los Angeles Rams will meet on Sunday.

Barring a tie, one of those teams will be crossed off the list.

If San Francisco loses, that leaves the Denver Broncos and one of the Buccaneers or Rams as the only teams with shorter odds than Carolina to be the last remaining undefeated team.

As for the Panthers’ upcoming schedule, it isn’t exactly loaded.

Carolina won’t play a playoff team from 2020 until they host the Washington Football Team in Week 11, and the only reason that team made the playoffs was because they were the best team in a bad NFC East division.

Beyond that, the Panthers visit the Buffalo Bills in Week 15.

I haven’t pulled the trigger on Carolina to go undefeated, but 7-to-1 odds at least has me considering that upcoming schedule for a team that ranks No. 1 overall in DVOA through the first two weeks.

Perhaps it’s worth a sprinkle.

The Hamilton Tiger-Cats (-6.5) beat the Ottawa Redblacks 24-7 in the CFL Week 8 opener on Wednesday night.

This Ham-Ott game was one of those where I think to myself “I hope no one is watching their first CFL game tonight.”

The under 43.5 cashed easily and is now 6-1 in Hamilton’s seven games this season.

Ottawa is 0-5 straight up and against the spread in its last five games.

While it wasn’t exactly the most exciting game of the season, making a little money certainly made it more fun.

The Prop Masters: Tiger-Cats vs Redblacks.

The Prop Masters went a perfect 6-0 with their recommendations for that game, including 4-0 on their player prop picks.

They’ll be back with their best bets on Friday.

The Tampa Bay Rays dealt the Toronto Blue Jays another blow with a 7-1 win on Wednesday afternoon.

After taking two of three to clinch their third straight playoff berth, Kevin Kiermaier made it clear that he hopes the Rays meet the Blue Jays again in the playoffs.

More Kiermaier: "I hope we play those guys (in the postseason). I really do. I hope we play them ... The motivation is there. That's all that needs to be said." #BlueJays

Ryan Borucki was ejected after hitting Kiermaier with a pitch in the eighth inning. Pitching coach Pete Walker was eventually tossed as well.

Benches clear during Jays vs. Rays as both Pete Walker and Ryan Borucki get ejected 😳

A loss to Tampa Bay, combined with the New York Yankees completing their sweep of the Texas Rangers, left Toronto and New York tied for the second American League Wild Card.

The Blue Jays will close out the road portion of their schedule with four in a row against the worst team in the AL Central in the Minnesota Twins beginning tonight.

Meanwhile, the Yankees will open a three-game series against the Boston Red Sox at Fenway Park on Friday night.