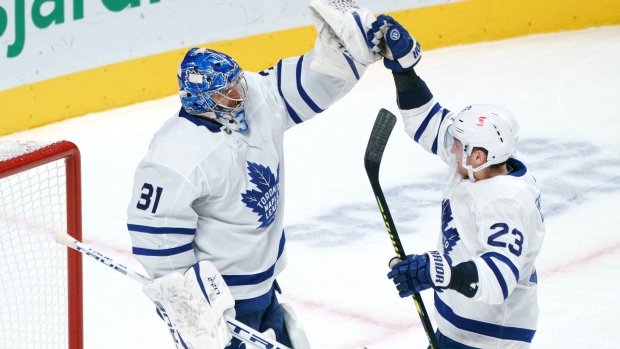 The good news for the Montreal Canadiens is that they were able to stop Auston Matthews from extending his goal streak to nine on Wednesday night.

The bad news is that it didn’t matter when it came to the final result.

Travis Dermott, Justin Holl and Ilya Mikheyev each scored their first goal of the season as the Toronto Maple Leafs beat the Habs 4-2.

Toronto, which entered the night at +105 odds as the betting favourite to win the North Division, moved one step closer to that goal by knocking off its biggest rival for the second time in as many meetings this season.

If Wednesday night’s win is any indication, the Maple Leafs likely won’t be available at plus money to win their division for very much longer.

The fact that none of Matthews, Mitch Marner, John Tavares and William Nylander scored a goal and they still beat arguably their toughest opponent in the division should be a concern to anyone who bet against Toronto to finish on top of the North.

Collecting 2 assists in his team's 4-2 win over the Canadiens tonight, John Tavares now has 10 points in 8 games against them since joining the @MapleLeafs in 2018-19. It gives him a per-game rate that trails only 5 on this list of those to produce big vs MTL in franchise history pic.twitter.com/1bOyz8eoRs

The Maple Leafs have won four straight to improve to 11-2-1 this season – the best record in the NHL.

While 14 games usually aren’t considered a big enough sample size to make broad judgments for what to expect from a team in any given year, that certainly isn’t the case this season.

Toronto has played exactly 25 per cent of its regular-season schedule.

Matthews and company have faced all six opponents they will have to play this regular season and beat them all, locking up 23 of a possible 28 points.

“For the other five teams in the 🇨🇦 North Division, I don’t see them in the same class as the Canadiens and the Leafs...”@CraigJButton & @dutchysc on Wednesday’s tight game between Toronto and Montreal and Justin Holl’s blueline emergence: https://t.co/eHVlGT6Cjg#TSNHockey pic.twitter.com/MBchkEYyCP

As the Buds continue to run away atop the North, their odds to win both the division and the Stanley Cup will only get shorter as more bettors jump on that train.

It will be very interesting to see where those numbers end up at season’s end.

For now, we can accept the fact that the Maple Leafs are clearly the team to beat in the North Division.

At this point, there really is no reason at all to bet against them.

Raptors Close In On .500 Record

Don’t look now but Toronto’s basketball team is starting to heat up as well – even though they haven’t played in the city they represent.

The over has now hit in each of their past seven games.

3 of the Raptors' 4 highest-scoring reg. season games in franchise history have come vs Washington in the last 2+ years. They scored 140 in a 2OT win over the Wiz in 2019, then again in regulation in 2020. Today, they dropped 137 on them.

Toronto has now won five of its last six games to improve to 12-13.

Can this team build on its recent hot streak and climb above .500 for the first time this season?

Well, the schedule is definitely about to get a lot tougher.

The Raptors wrap up a six-game road trip against the Boston Celtics tonight.

While Toronto shouldn’t have a problem with a Minnesota team that has the NBA’s worst record, the other teams on that list are pretty good.

After a terrible start, the Raptors have clawed their way back into the playoff picture in the Eastern Conference.

It will be interesting to see where they stand at the end of February following their most difficult stretch of the season.