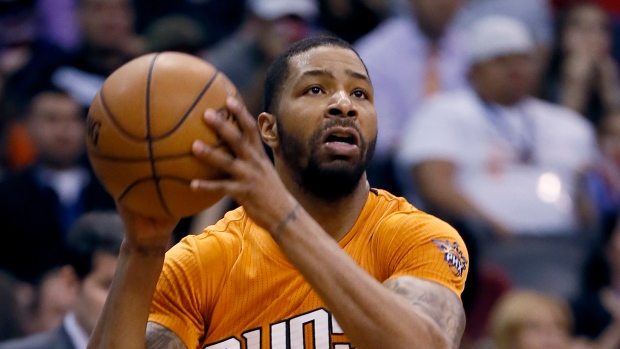 Phoenix, AZ - Marcus Morris had a career-high 34 points and 12 rebounds as the Phoenix Suns defeated the Utah Jazz 100-93 on Friday night.

Favors' reverse layup with 4:49 remaining in the second quarter staked the Jazz to a 40-37 lead before Phoenix closed the half on a 17-2 run to seize control.

Isaiah Thomas hit a 3-pointer before Marcus Morris knocked down a pair from long distance to start the surge, which was capped on a Goran Dragic layup for a 54-42 Suns margin heading into the break.

Trey Burke's trey during the latter stages of the third pulled Utah within 76-71 heading into the fourth.

Phoenix, though, began the frame on an 8-2 spurt and was never challenged again. Marcus Morris finished off the swing with a jumper for an 84-73 spread.

The Suns held a 25-24 edge following a quarter of play.

Phoenix finished 14-of-27 from beyond the arc (51.9 percent) ... P.J. Tucker had 12 points and six rebounds for the Suns ... Rudy Gobert provided 14 points and 12 boards for the Jazz ... Utah held a 46-28 points in the paint advantage ... Suns center Alex Len, who sprained his ankle against the Portland Trail Blazers Thursday, did not play.