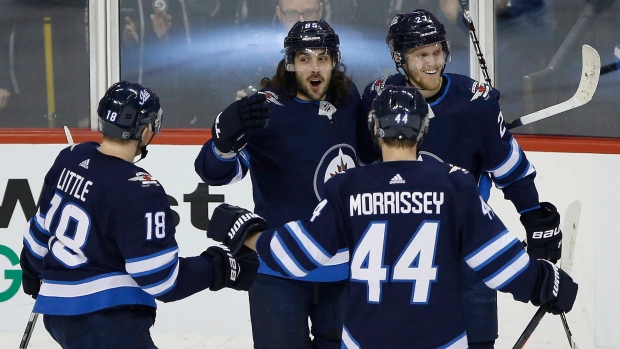 WINNIPEG — Blake Wheeler had a plan to spark the Winnipeg Jets on Thursday and it involved a familiar play.

The Jets captain looked for linemate Mark Scheifele. He found the centre at the front of the net and Scheifele fired in his 18th goal of the season to tie it 4-4 against the Edmonton Oilers at 9:58 of the third period.

In overtime, the sequence went Wheeler to Scheifele and then a pass to defenceman Josh Morrissey, who scored 41 seconds into the extra period to lift the Jets to a 5-4 victory.

"You know when I have the puck, I'm looking for him," Wheeler said of Scheifele. "That's the guy I want to pass to. We've had some success doing it, just continue to build off that."

Morrissey fired a high shot past goalie Cam Talbot for his fourth goal of the season, which came just seconds after Oilers captain Connor McDavid hit the post next to Jets netminder Connor Hellebuyck.

"I guess we kinda regrouped, came back again, we went the other way and kinda got them on an odd-man rush," said Morrissey, who also had an assist. "Scheif and Wheels made the play to get it to me, and I just tried to make a good shot."

Mathieu Perreault, Nikolaj Ehlers and Patrik Laine, with his 22nd of the season following a six-game goal drought, also scored for Winnipeg. Wheeler, Scheifele, Dustin Byfuglien and Bryan Little each contributed a pair of assists. Byfuglien has one goal and five assists in a three-game point streak.

Winnipeg led 3-1 early in the second period on Laine's goal, but the Oilers answered back with three straight goals.

"The second period was a good period for us and then the third period kinda sucked after a little bit," said Spooner, who opened the game's scoring at 10:12 of the first.

"We went really hard at the blue lines and that kind of cost us a little bit. But we got a point here and that's not the worst thing."

Winnipeg outshot Edmonton 17-2 in the third.

"It was a high-level playoff game, that's what it was," he said. "It was very high level."

He pointed to Edmonton's last three games as opportunities for the players to learn that attention to detail is key and every shift counts.

"We played great against Calgary, we had flashes of great play against Colorado, but then they dialed it up and we didn't have an answer and we held on and our goalie was great," Hitchcock said. "The same thing today.

"So it's more about the lessons we're learning. As long as we take the proper information and move it from here, we're going to really use this as hopefully a stepping stone."