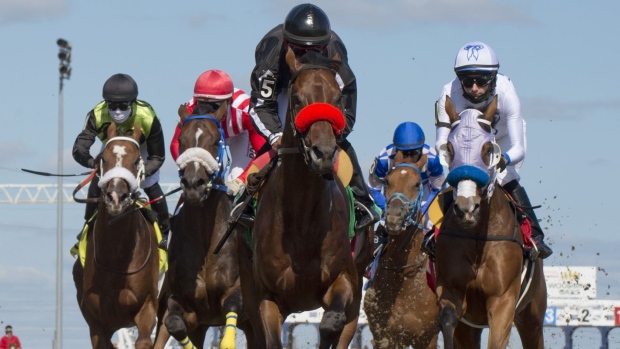 TORONTO — Horse trainer Christophe Clement had a one-two winning Sunday at Woodbine with Mutamakina and La Dragontea finishing first and second in the $602,000 E.P. Taylor Stakes.

Mutamakina edged a hard-charging La Dragontea at the wire of the one and one-quarter mile turf race.

Mutamakina won the Dance Smartly Stakes at Woodbine on Aug. 22, but wasn't favoured Sunday as an 8-1 choice.

“She ran well over here about a month ago and we saw an opportunity again to bring her out here,” said her jockey Dylan Davis.

“Christophe, first off, did a great job of getting her here. I've been breezing her, setting up for this race, and she's been breezing well and maintained herself and we knew that she would be tough coming here.”

Kalifornia Queen was third, one length ahead of Waliyak.

The E.P. Taylor was the final leg of Woodbine’s “Ladies of the Lawn,” which is three turf races for fillies and mares including the Dance Smartly and Canadian Stakes.

The owner of the horse accumulating the most points over the three races receives a bonus of $50,000.

The turf stakes for three-year-olds attracted a field of 10.

Luis Contreras navigated Avie’s Flatter to a half-length victory at the wire over Turned Aside.

Olympic Runner was third, besting Momos by a neck.