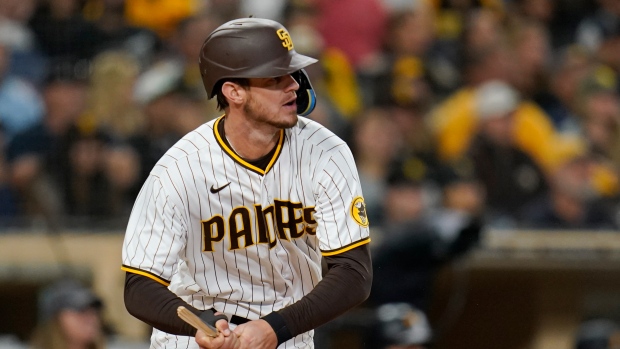 SAN DIEGO (AP) — Wil Myers drove in Manny Machado with a shattered-bat single in the eighth inning and the San Diego Padres beat the Pittsburgh Pirates 4-3 on Friday night.

Machado, who came in with an NL-best .357 average, started the winning rally with a leadoff walk against Duane Underwood Jr. (0-1) and took third on Eric Hosmer’s single to right-center. Myers brought in Machado with a single to center as his bat shattered.

The Padres’ slumbering offense came to life when Luke Voit hit a tying three-run homer with two outs in the sixth. Voit was one strike away from striking out for the third straight time when he drove a 2-2 pitch from reliever Wil Crowe into the seats in left-center field. It was his first since May 11 and third overall.

The Padres hadn’t hit a home run since Machado’s solo shot in a 2-1 win at San Francisco last Saturday.

Jurickson Profar singled off Carlos Quintana leading off the sixth and Eric Hosmer reached on an error by first baseman Josh VanMeter. Hosmer was originally called out, but the Padres challenged and the call was overturned because although the throw beat Hosmer to the bat, VanMeter didn’t get his foot on the base. It was originally ruled a single, but later changed to an error.

Second base umpire CB Bucknor jogged off the field during the top of the seventh and returned before the bottom of the inning wearing his protective gear and took over for plate umpire Jeff Nelson, who left the game. No explanation was given.

Pirates: 1B Michael Chavis left in the sixth with discomfort in his left forearm. ... 1B Yoshi Tsutsugo was placed on the 10-day injured list, retroactive to Wednesday with a strained lumbar muscle. ... INF/OF Tucupita Marcano was recalled from Double-A Altoona.

Pirates RHP JT Brubaker (0-4, 4.64) and Padres RHP Joe Musgrove (5-0, 1.90) are scheduled to start in the middle game of the series. Musgrove pitched for the Pirates for three seasons before being traded to his hometown before to the 2021 season. The Padres have won all eight of Musgrove’s starts.