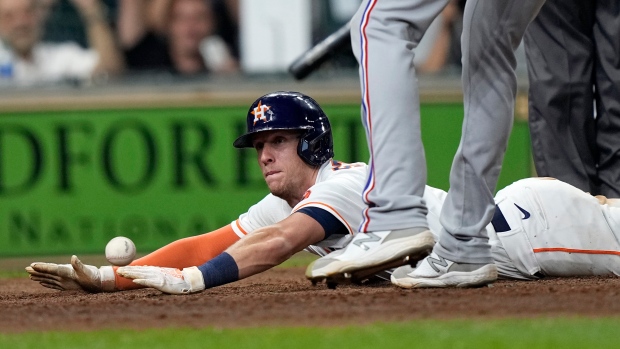 HOUSTON (AP) — Myles Straw scored on a wild pitch in the 11th inning to give the Houston Astros a 4-3 win over the Texas Rangers on Thursday night.

After the Rangers loaded the bases with an intentional walk to Alex Bregman that brought up Chas McCormick, reliever Brett Martin (0-1) uncorked a 1-2 pitch that bounced away, and Straw raced home from third.

Brooks Raley (1-2) stranded runners at the corners in the top of the inning to earn the win.

José Altuve gave the Astros a 3-2 lead in the second with a three-run double down the left-field line.

Texas upped the lead to 2-0 on a sacrifice fly by Jose Trevino in the second.

Joey Gallo tied it at 3 with an RBI groundout in the third.

Javier allowed three runs and four hits with six strikeouts in seven innings. The right-hander retired 13 straight during one stretch.

Houston finished 2 for 18 with runners in scoring position, while the Rangers went 0 for 11.

Astros: 1B Yuli Gurriel was out of the lineup but feeling better, manager Dusty Baker said. Gurriel left Wednesday’s game due to illness. “He’s going through the health and safety protocols, but he’s been cleared to work out today and see how he feels,” Baker said, adding he did not think it was COVID-19 related and that Gurriel had received his vaccination shots. … RHP José Urquidy had an MRI after exiting Wednesday’s game in the fourth inning with posterior shoulder discomfort. … LHP Framber Valdez (left index finger fracture) will throw a bullpen Friday at Minute Maid Park before possibly heading out on a rehab assignment, Baker said.

Rangers: LHP Wes Benjamin (0-1, 4.76 ERA) is expected to be recalled from Triple-A Round Rock on Friday to make his first start of the season. Benjamin has appeared in three games for the Rangers out of the bullpen this season, allowing three runs in 5 2/3 innings before being optioned on April 17.

Astros: RHP Zack Greinke (2-1, 4.23) will look to rebound after his third straight four-inning outing on Sunday against the Blue Jays. Greinke was tagged for four runs and nine hits by Toronto.