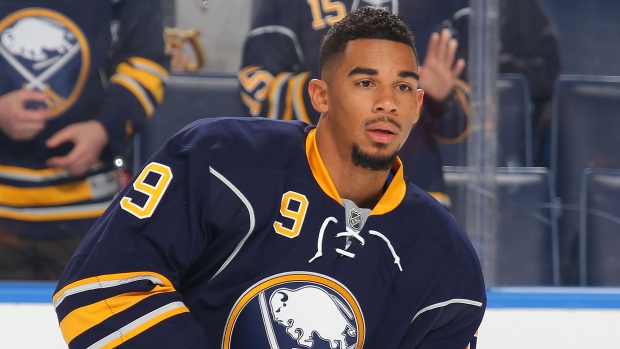 BUFFALO, N.Y. — A judge will dismiss the charges against Buffalo Sabres forward Evander Kane stemming from scuffles with women in a bar if he stays out of future trouble, according to a prosecutor who described the athlete's behaviour as "arrogant, boorish and surly, but not criminal."

The arrangement is contingent on the 25-year-old player avoiding legal issues for the next six months. Kane did not speak during or after his brief appearance in Buffalo City Court on Monday.

Kane's lawyer said the action does not include an admission of guilt, and Kane still denies the allegations.

"Evander has steadfastly maintained that he did nothing wrong," attorney Paul Cambria told reporters after the hearing. "Nothing has changed."

Kane was arrested in July, a month after he was accused of grabbing three women by the hair and neck in separate encounters on the same night in a downtown Buffalo bar. Kane was removed from the club by bouncers. He was charged with misdemeanour trespass and noncriminal violations of harassment and disorderly conduct.

Erie County District Attorney Michael Flaherty said cameras inside the bar captured "images of (Kane) in contact with other patrons, grabbing a girl by her hair, grabbing another girl by her wrist and then scuffling with some bouncers as they try to escort him."

"His conduct could be described as arrogant, surly and boorish," the prosecutor said, "but at the end of the day what he did did not rise to the level of a criminal offence."

Flaherty described the outcome, called an adjournment in contemplation of dismissal, as routine in cases where someone with no criminal history is charged with low-level offences.

Cambria said the decision was appropriate and that Kane was treated like any other defendant.

With the case wrapping up, Kane "is going to pay attention and be the hockey star that he is," Cambria said.

Kane has not played since being injured in the Sabres season opener Oct. 13. He cracked three ribs when he crashed into the end boards during the second period of Buffalo's 4-1 loss to the Montreal Canadiens.

Kane had 20 goals and had 15 assists last season for the Sabres after being acquired in a trade with Winnipeg. He missed 17 games with a knee injury.