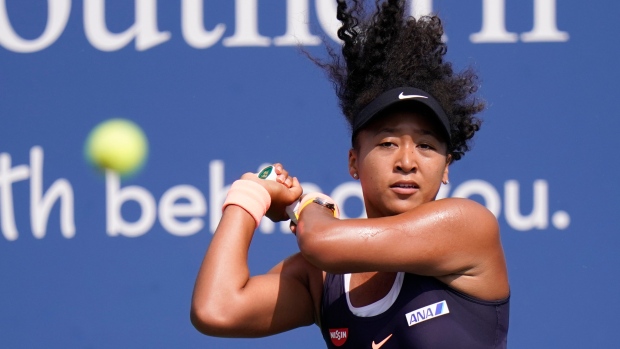 Raonic, from Thornhill, Ont., beat No. 4 seed Stefanos Tsitsipas of Greece 7-6 (5), 6-3 in the semifinals of the Western & Southern Open on Friday.

Raonic, ranked 30th in the world, will Novak Djokovic of Serbia in the final after the tour's top-ranked payer beat No. 8 seed Roberto Bautista Agut of Spain 4-6, 6-4, 7-6 (0) in the second semifinal.

"I'm playing well," Raonic said. "I think I'm moving much better than I have in recent years and I think that's putting me in better positions so I'm able to be more effective, I'm able to be aggressive earlier and I'm able to play more on my terms quicker in the points."

Raonic is 0-10 versus Djokovic in his career.

The Canadian's most recent final appearance was in Stuttgart, Germany in June 2018. Raonic, 29, has won eight career titles, most recently in January 2016 in Brisbane, Australia.

It will mark the fourth Masters 1000 final — the highest level on tour below Grand Slams — of Raonic's career. He is 0-3 in his previous appearances.

The win Friday will push Raonic into the top-20 of the rankings next week. He'll be 18th if he loses the final and 13th if he wins.

Raonic, who has been hampered by injuries in recent years, has said the five-month break during the COVID-19 pandemic allowed him to have three six-week training blocks.

"I had the freedom to train and really focus on specific things," he said.

Raonic saved a set point trailing 6-5 on serve in the first set before winning the tiebreak with a couple of forehand winners.

The hard-serving Raonic won 90 per cent of his points on first serve.

Normally held in Cincinnati, the Western & Southern Open has been moved to New York this year during the pandemic. It is being held on the grounds of the U.S. Open, which starts Monday. No fans will be in attendance at either tournament.

"Having won a bunch of matches this week, I don't think there's a better way to be preparing (for the U.S. Open)," Raonic said. "I definitely can't complain about anything that's going on in terms of my tennis right now."

The Western & Southern Open is the first men's tournament since the pandemic started in March.

Meanwhile, Naomi Osaka was up to the moment after two days of little sleep and unexpected stress.

The two-time Grand Slam champion returned to the court after bringing the push for racial justice to the forefront on the tennis tour, and she advanced to the women's final of the Western & Southern Open with a straight-set victory.

This one meant a lot more.

“Of course I feel extra pressure now that there's more eyes watching me,” she said.

After a one-day break in the tournament prompted by her decision to speak out, Osaka reached her first Western & Southern title match by gritting out a 6-2, 7-6 (5) victory over Elise Mertens.

The 22-year-old Osaka was hoping someone else in tennis would take the lead in speaking up for racial justice — she considers herself more of a follower — but realized she would have to make the first step. She acknowledged that it was “a bit frightening” to get so much attention the last two days, given how she prefers to stay in the background.

“I feel like it's been kind of hectic and I honestly haven't been able to get that much sleep yesterday, so I was glad to win today,” she said.

Osaka, the only Top 10 player left in the women's bracket, tweeted after her semifinal victory that she was exhausted and “sick to my stomach” over the many Black people killed by police. She had decided to withdraw from the tournament as a statement in support of racial justice, joining athletes in other sports.

Other tennis players expressed support and the tournament was halted for one day, prompting Osaka to stay in the draw.

Back on court, how would she handle the emotions of the last few days?

“Preparing for this match was a bit stressful,” she said.

Even though her first serve was inconsistent — she made only half of them — the fourth-seeded Osaka fought off 18 of 21 break points while gritting it out.

“I totally respected her decision,” Mertens said of Osaka's initial withdrawal. “I think it's great what she does and she's a role model for tennis. So I totally accept it.”

One alarming moment: Osaka grabbed her left hamstring after chasing a ball during the tiebreaker, but completed the match without pause. Osaka won the 2018 U.S. Open and will be coming off a successful week — in many ways — heading into this one.

Osaka will face resurgent Victoria Azarenka, who beat Johanna Konta 4-6, 6-4, 6-1 to reach the Western & Southern final for the first time since 2013, when she beat Serena Williams.

The 31-year-old Azarenka considered retiring at the start of the year. She lost in the first round at Monterrey and to Venus Williams at Lexington last week.

Azarenka, ranked No. 59, smiled throughout her semifinal and raised her index finger after finishing it off. She has lost only one set this week, showing exuberance over her success. She's been trying to more fun on the court.

This report by The Canadian Press was first published Aug. 28, 2020.

Note to readers: This is a corrected story. A previous version had the wrong projected ranking for Milos Raonic in the event he wins the tournament final.