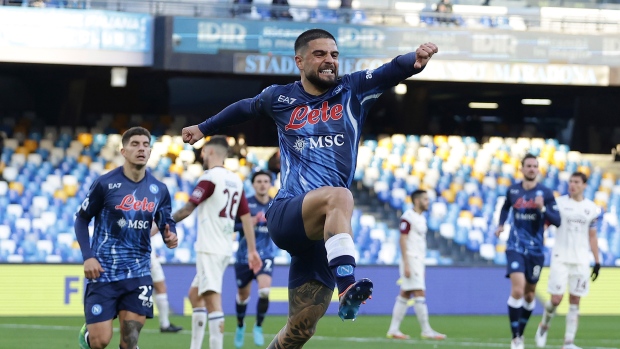 MILAN (AP) — AC Milan lost more ground on league leader Inter Milan and also lost another important player ahead of the derby as it drew 0-0 against Juventus at San Siro on Sunday.

Key forward Zlatan Ibrahimović limped off in the 28th minute with an apparent Achilles tendon problem. The 40-year-old Ibrahimović will likely join several other regulars on the injury list.

Milan slipped to third in Serie A, below Napoli on goal difference. Head-to-head is the first tiebreaker at the end of the season. Milan is four points behind Inter, having played a match more, and meets the Nerazzurri in its next match after the international break.

Juventus moved to within one point of the top four and the Champions League spots.

The match at San Siro is a classic fixture in Italian soccer between two age-old rivals. There were only 5,000 spectators allowed into the stadium this time because of coronavirus restrictions but there were hundreds of fans outside to welcome the Milan team, chanting songs and setting off flares.

The Rossoneri had the best chances and more of the play, but both teams struggled to carve out clear scoring opportunities.

Juventus drew 1-1 with Milan in Turin in September. It was the first time in 30 years that both league matches between the two have ended in a draw.

Lorenzo Insigne sent a clear message to Napoli fans after scoring in a 4-1 win over bottom club Salernitana.

The Napoli captain celebrated by pointing to the badge on his jersey and clearly saying to the camera, in Italian, “I love you, I will always love you.”

It was the 30-year-old Insigne’s first goal since signing a pre-contract agreement to join Toronto FC at the end of the season.

Napoli took the lead in the 17th minute when Elif Elmas chested a ball to Juan Jesus, who fired into the bottom right corner. It was initially disallowed for handball by Elmas but awarded after a video review.

Federico Bonazzoli netted a surprise equalizer for Salernitana but Napoli restored its lead on the stroke of halftime when Dries Mertens converted a penalty after Elmas had been brought down by Frédéric Veseli.

Amir Kadri Rrahmani extended Napoli’s advantage shortly after the break and added a fourth six minutes later as Veseli gave away another penalty, this time for handball after Insigne’s shot ricocheted off his side and onto his arm.

The Salernitana defender was sent off after being shown a second yellow card and Inisgne converted the penalty to move level with Diego Maradona on 115 goals for the club.

Salernitana remained stuck at the bottom of the table, eight points from safety.

New signing Sérgio Oliveira scored his second goal in as many league games for Roma to help it win 4-2 at Empoli.

José Mourinho’s Roma moved above Lazio and Fiorentina into sixth.

Sottil netted in the 75th, 10 minutes after Alvaro Odriozola had been sent off for handball. João Pedro had headed in the opener for Cagliari at the start of the second half.

Both teams also had penalties saved.

Cagliari remained 18th, but moved to within a point of safety. Spezia moved to eight points above the drop zone after beating 10-man Sampdoria 1-0 in a relegation battle. Torino drew 1-1 with Sassuolo.