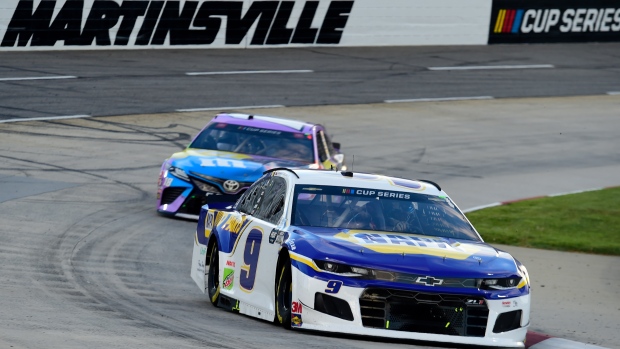 If you are looking for excitement and drama, there really is nothing else in NASCAR quite like "The Big One."

Talladega Superspeedway is the biggest track on the Cup Series schedule.

It is also the most dangerous and unpredictable.

Since 2005, exactly half of the 30 Cup Series races at this course have been decided with a pass on the final lap.

Talladega has also produced three of the six-closest finishes in the Cup Series dating back to 1993, which was when NASCAR first introduced electronic scoring.

It was the closest Cup Series finish since Jimmie Johnson won the Aaron’s 499 at Talladega back in 2011.

While the drama can make these races a lot of fun to watch, it can also make predicting outcomes that much more difficult.

It certainly doesn’t help that so many of the drivers we are accustomed to seeing listed among the betting favourites week in and week out have struggled here in recent years, either.

Here is a closer look at the betting odds for Sunday’s GEICO 500.

Instead, he settled for his second runner-up and sixth top-five finish – tied for most in the Cup Series this season.

While drivers like Kevin Harvick, Kyle Busch and Martin Truex Jr. struggled at Talladega in recent years, Elliott has trended in the opposite direction.

The year before, he placed third in this race.

For as unpredictable as Talladega is, Elliott checks off enough boxes to understand why he is the consensus favourite to win the GEICO 500.

With another win on Sunday, Keselowski would tie Dale Earnhardt Jr. and Jeff Gordon for the second-most wins all-time at Talladega with six, trailing only Dale Earnhardt (10).

So why doesn’t the driver of the No. 2 Penske Racing Ford have shorter odds?

From October of 2014 through 2017, Keselowski registered three victories and five top-five finishes in seven starts here.

On the heels of seven consecutive top-10 finishes overall including a pair of wins, Keselowski appears primed for a strong performance at The Big One this weekend.

However, it’s still a case of buyer beware at one of the most unpredictable tracks on the NASCAR Cup Series schedule.

Logano is coming off his worst result of the season at Homestead-Miami last weekend.

However, his three Cup Series wins at Talladega are the second-most all-time and tied for his most wins at any one track.

Penske Racing has dominated at this venue with eight wins here since 2012 – no other team has more than two.

With top-five finishes in four of his last five starts at Talledega, including winning this race in 2018, Logano seems like a safe bet to contend for the outright win once again this Sunday.

He’s also only the third driver to hit that milestone without ever winning a Cup Series Championship.

After posting three wins through 12 starts, perhaps this is the year that Hamlin finally puts it all together and contends for a title.

Joe Gibbs Racing will line up 1-2-3 on the starting grid for Sunday’s race with Hamlin and Martin Truex Jr. on the front row.

While he hasn’t looked great at this track in recent years, it’s hard to completely overlook Hamlin based on what he has done so far this season.

There are a few reasons why Blaney’s number has shortened to +1000 over the past couple of days.

First, he won this race in a dramatic photo finish last season.

Second, he’s finished no worse than fourth in three consecutive races and five of his last six starts overall.

Third, drivers like Harvick, Busch and Truex Jr. have struggled at Talladega in recent years, opening the door wide open for another Penske Racing driver like Blaney to contend here.

It isn’t a mistake that only four other drivers have shorter odds to win the GEICO 500.

Don’t sleep on Blaney this weekend.

After eight straight top-10 finishes to start the season, Harvick has placed 11th or worse in three of his last four outings.

Still, Harvick’s 542 laps led this season are 62 more than Logano for the most in the Cup Series.

The current Cup Series points leader could surprise at +1400.

You might be surprised to learn that Almirola has an opportunity to tie Dale Earnhardt Jr.’s record for consecutive top-10 finishes at Talladega this weekend.

The driver of the No. 10 Ford for Stewart-Haas Racing has recorded seven straight top-10 results at Talladega since 2016.

In addition to that streak, both of Almirola’s Cup Series wins have come at superspeedways, including a playoff victory here in October of 2018.

While so many top-tier drivers have struggled at Talladega, Almirola has thrived at this track in recent years.

There isn’t a better value on the board than Almirola at +2000 to win the GEICO 500 outright.

*All Betting Information appears as listed by Bodog on Friday, June 19, 2020.