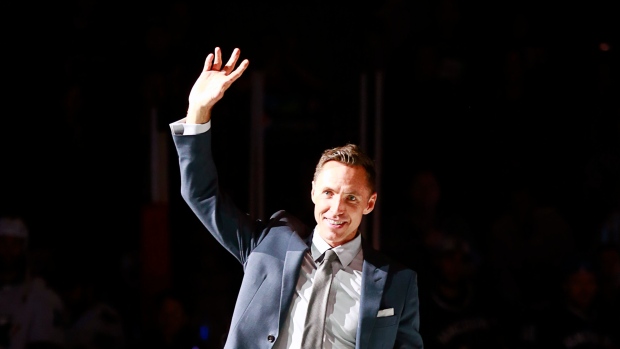 TORONTO - Suffering through three injury-plagued seasons in Los Angeles is not exactly how Steve Nash wanted to end his professional basketball career, but his tough time with the Lakers actually allowed him to make a seamless transition into life after the NBA.

The 41-year-old from Victoria retired last month to cap an illustrious 19-year career that included eight all-star appearances, seven nominations to the All-NBA team and consecutive MVP awards. Nash left the league as its all-time leading free-throw shooter and third overall in assists.

An assortment of injuries limited Nash to just 65 games over his final three NBA seasons with the Lakers. He suffered a broken leg in just his second game with the club and missed 24 contests, then suited up just 15 times in the 2013-14 campaign.

Back and nerve issues prevented Nash from playing at all this season but the six-foot, 195-pound point guard said the extended downtime proved to be a blessing in disguise.

"I think that really helped me in kind of an odd way," said Nash, in town Wednesday for a youth basketball program. "It was painful and difficult for me but at the same time it did give me a little perspective and closure when I came to the end of 18 months and realized I can't do this.

"I kind of feel fortunate for that because I could've been in a pretty devastating place if I had abruptly found the end was there."

But while Nash is no longer playing basketball, he's certainly not out of the game. He remains the general manager of Canada's national men's team and hopes to get involved in the marketing and promotion of the program.

"That's an important component of our program because we don't have a lot of resources," Nash said. "We live in the best country in the world and we give our money to a lot of great places but it leaves us with the responsibility of trying to raise it ourselves with our program for the most part.

"So yeah, I'm here, I'm working and enjoying it. I just want to see our kids thrive because of it."

Nash was unaware of Wiggins' statement, saying earlier Wednesday there was no questioning Wiggins' desire to play for Canada.

"I don't want to make any proclamations now but Andrew wants to play and I think is excited to play," Nash said. "As with all of our NBA players, they have a career to be careful of, a club that for the most part owns their rights and needs to protect its investment.

"But all of our guys want to play and I would expect most of them, if not all of them, to be there . . . I think we'll see him (Wiggins) in red and white this summer."

These are also heady times for Canada's lone NBA entry, the Toronto Raptors. The franchise has clinched the Atlantic Division crown for the second straight year and will have home-court advantage for at least the opening round of this year's playoffs.

"I think it's an amazing time right now for Raptors fans and for basketball across the country," Nash said. "The Raptors are really the national team now in many respects . . . many of my friends that I grew up with in B.C., they know everything about the Raptors.

"That's exciting for me to come home and see how this team has galvanized the country as far as basketball fans go."

And Nash believes Toronto is capable of making noise in the post-season.

"They have a lot of ingredients, a lot of talented players, a toughness," he said. "They play together and the right way so I think it's a great team to watch and a great team for our young kids to look at"