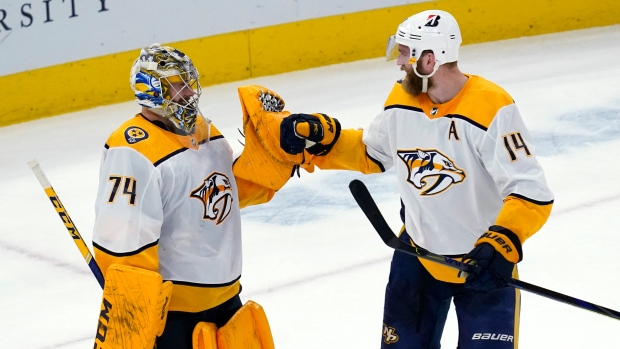 Luke Kunin had two assists as Nashville (17-17-1) moved ahead of Columbus into fifth in the Central Division, two points behind the Blackhawks in the race for the division’s final playoff berth.

Chicago (16-14-5) lost for the fifth time in seven games. Pius Suter scored for the third straight game, but the Blackhawks were unable to generate much offence against the defensive-minded Predators.

“We came out and dictated the pace, got off to a lead,” Johansen said. “It’s getting to that time of year where it’s do-or-die.”

Nashville coach John Hynes said: “You understand the excitement of the game, but the preparation and the work level of the players has been a big difference.”

Grimaldi lifted Nashville to a 2-0 lead midway through the second period with his fifth goal in two games, beating Kevin Lankinen from the high slot at 12:58. He scored four times on Thursday in Dallas.

Suter got one back for Chicago late in the second, jumping on a rebound and beating Juuse Saros at 17:33. It was Suter’s 11th of the season.

With the Predators keeping the Blackhawks on the perimeter for most of the night, Saros stopped 29 shots in his ninth win of the season, moving ahead of No. 1 goaltender Pekka Rinne.

“They outskated us in the first period,” Suter said of the Predators. “We couldn’t win any battles.”

Grunland made it 3-1 by turning Chicago defenceman Calvin de Haan’s turnover in the slot into an easy goal 51 seconds into the third.

“We’re tracking to the puck,” Grunland said. “Some of it is confidence, but we’re doing a really good job without the puck. We’re causing turnovers and that’s how we’re getting a lot of chances.”

Johansen opened the scoring 5:10 into the first. Alone in the slot, he converted Viktor Arvidsson’s pass from behind the net.

“They were a desperate team,” Chicago coach Jeremy Colliton said.

"We’ve got to be better. It was disappointing.”

Kunin provided a lift in his return after missing 13 games with a lower-body injury. He replaced leading Predators forward Filip Forsberg, a surprise scratch with an upper-body injury.

Second-year forward Kirby Dach made his season debut for the Blackhawks, activated from long-term injured reserve after missing the first 34 games. Dach fractured his right wrist while playing for Canada’s world junior team during an exhibition against Russia. The third-overall pick in the 2019 NHL draft had eight goals and 15 assists in 64 games during his rookie season with the Blackhawks.

The Blackhawks host the Predators again on Sunday night.