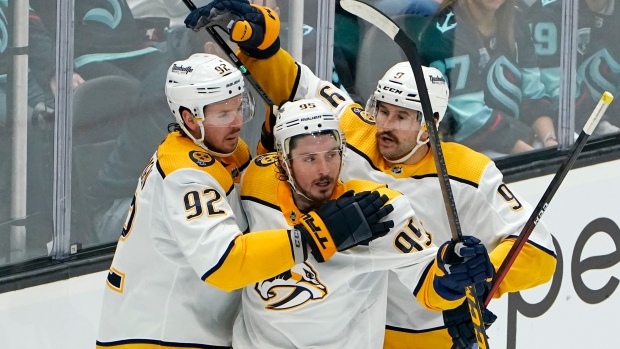 Jared McCann and Adam Larsson scored for the Kraken.

Seattle entered with three wins in the last four games, one of the best stretches of its inaugural season, and the Kraken took an early lead when McCann scored his team-leading 16th goal on a 5-on-3 power play nine minutes in.

Nashville tied it 21 seconds before the first intermission on Kunin’s 10th goal, a one-timer from the top of the left circle.

Seattle again took the lead in the second, going ahead 2-1 when Yanni Gourde’s pass from behind the net found Larsson streaking in front with 7:39 left in the period.

Forsberg tied it 2-all about three minutes later, taking the puck the entire length of the ice on a rush and finishing with his 21st goal.

The Predators took the lead with 3 1/2 minutes left in the period. Ekholm came around behind the net and his wraparound shot deflected in off the skate of Seattle defenseman Vince Dunn.

Nashville added another power-play goal by Duchene with about four minutes to go in the third.

NOTES: Nashville recalled F Cole Smith and D Matt Tennyson from the taxi squad. … Seattle was down two of its top six defensemen. Jamie Oleksiak (lower body) is day-to-day and missed his fourth straight game. Carson Soucy (lower body) is week-to-week after getting hurt in the first period Sunday against Florida. … Kraken F Joonas Donskoi was back in the lineup. Donskoi was scratched Sunday after appearing in each of the first 40 games.

Nashville: Plays at Edmonton on Thursday.

Seattle: Plays at Pittsburgh on Thursday.