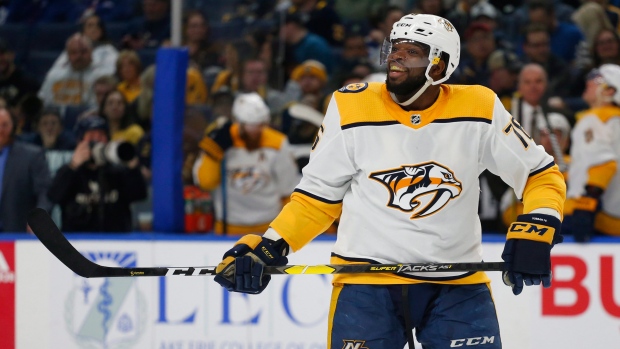 The Nashville Predators dealt the 30-year-old Toronto native to the Devils on Saturday ahead of the second round of the NHL draft.

New Jersey will give up defencemen Steven Santini and Jeremy Davies.

Subban has long been an elite NHL defenceman, but wasn't at his best with the Preds last season, tallying 31 points in 63 games.

"We appreciate P.K.'s contribution to the Predators and the Nashville community over the past three seasons, which have seen our organization have unprecedented success," he said in a statement.

"We had to make a business decision. With an aim at strengthening our forward corps this off-season, and the continued strength of our defensive group, we felt it was necessary to clear up salary cap space this way."

Santini, 24, has 21 points in 114 NHL games, all with the Devils, and New Jersey signed Davies to an entry-level deal at the beginning of April.

The Preds also received a pair of picks in the deal, including the Devil's 34th overall selection in Saturday's draft and a second-round pick next year.