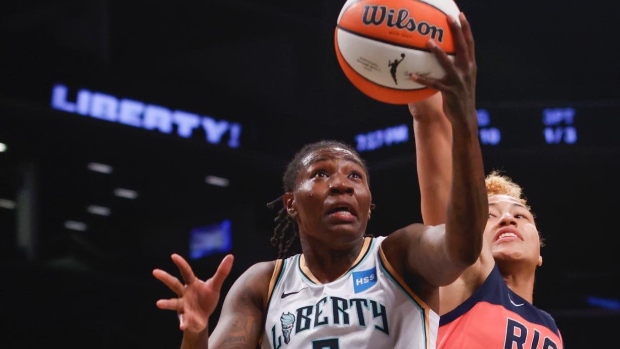 NEW YORK -- — The Liberty were struggling scoring on the outside, so the team focused on getting points inside.

It worked thanks to a strong effort from Natasha Howard, who scored a season-high 27 points to help New York beat the Washington Mystics 77-65 on Thursday night.

"Finishing inside was big for us," Liberty coach Sandy Brondello said. "Tasha was amazing for us. Han just keeps getting better and better. She's grasping things quite well and she has such a soft touch."

"We had a lot of wide-open looks, we just missed them," Brondello said. "We're going to have nights like that. I like that we are taking a lot of 3s. Defense tonight won the game."

Howard added nine rebounds and was 13 for 17 from the field for the Liberty (6-9). Sabrina Ionescu had 10 points, nine assists and seven rebounds.

The Mystics (10-7) were missing star Elena Delle Donne, who has been taking games off to rest her back which caused her to miss all of last season. Washington played in Minnesota on Tuesday and play again on Sunday at home.

"We have three games this week and we try to have her only play two right now," Washington coach Mike Thibault said.

Washington led 24-20 after one quarter despite Howard scoring 12 points for New York in the opening period. The Liberty outscored the Mystics 20-11 in the second quarter to take a 40-35 advantage into the half.

New York extended the lead in the third quarter to 10 behind Howard, who had nine points in the period. The Mystics got within eight in the fourth quarter, but could get no closer.

Despite being listed as probable for the game, DiDi Richards missed her 14th game of the season because of a right hamstring injury. She went through warmups but wasn't ready to go.