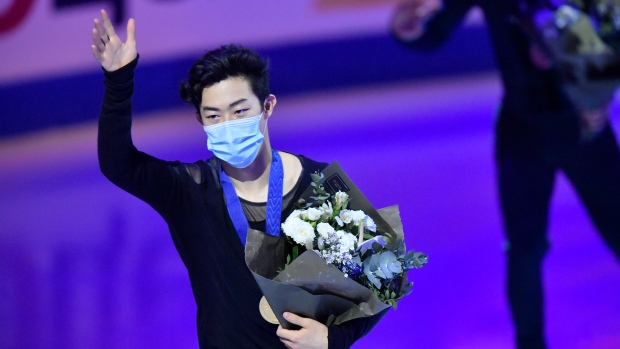 Chen was dynamic in easily surpassing two-time Olympic champ Yuzuru Hanyu of Japan in the free skate and stamp himself as the man to beat at next year's Beijing Olympics. Hanyu struggled mightily Saturday and fell to to third place behind 17-year-old countryman Yuma Kagiyama, who took silver in his first senior worlds.

No one has had the jumping mastery of Chen. His “Quad King” reputation is well founded, and he landed his five four-rotation jumps with what NBC analyst Johnny Weir dubbed “technical wizardry.” But there was more to it: an intensity, even a ferocity, as if Chen was conquering each quad rather than simply completing them. Plus a balance of artistry and technique that has improved since 2017, when Chen won his first of five successive U.S. titles.

Even the look on his face at the conclusion of his free skate was intensely focused rather than celebratory.

Besides, Chen had to await Hanyu's performance, which was, for the Japanese star, rather pedestrian. He opened up on two jumps, had sloppy landings on others, and seemed to know it was not nearly enough when he shook his head before taking a bow and leaving the ice.

Kagiyama couldn't sit still awaiting his marks after a personal best by 11 points in which he landed three quads and, despite a couple of bobbles, was a solid second to Chen in the free skate. Kagiyama leaped and ran in place in the kiss-and-cry zone, then sat and practically danced in his seat as the magnitude of his achievement hit home.

Hamilton won four successive worlds from 1981-84. Since then, three others (Canada's Kurt Browning and Patrick Chan, Russia's Alexei Yagudin) have gotten three in a row.

Keegan Messing placed a career-best sixth in the competition and locked up a second spot in men's singles for Canada at next year's Olympics by finishing inside the top 10.

Chen has not lost a competition since the 2018 Olympics, when perhaps the worst short program of his career doomed him. He rallied with a spectacular free skate to climb from 17th place to fifth.

A fourth-place finish for Mikhail Kolyada assured Russia, which is having an outstanding worlds, of three men's spots at Beijing. The United States and Japan also are assured that.

American Jason Brown, who doesn't have the bigger jumps to match the medallists but is masterful at artistry, finished seventh.

Later Saturday is the free dance to finish the first worlds since 2019. Last year's event was cancelled because of the COVID-19 pandemic.