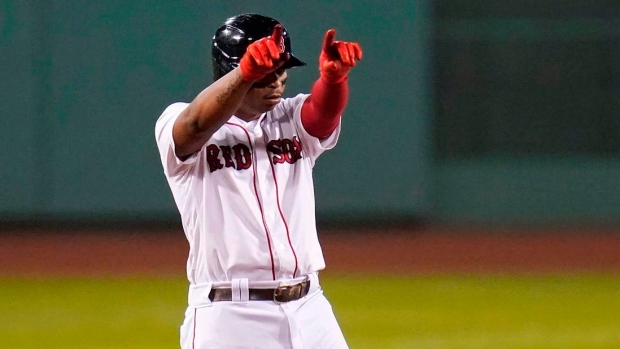 BOSTON — Nathan Eovaldi struck out eight over six scoreless innings, Rafael Devers hit a three-run double that capped a six-run third and the Boston Red Sox beat the Baltimore Orioles 9-1 on Wednesday night in a matchup of the AL East’s worst teams.

Kevin Plawecki had three hits and drove in two runs for the Red Sox, who won their third straight in their bid to escape last place.

Austin Hays hit a solo homer and had three hits for Baltimore, which has lost six of seven. The Orioles are one game ahead of the Red Sox.

A night after the Orioles were eliminated from playoff contention, the Red Sox took control by scoring a pair of runs in the first and broke open the game in the third.

Eovaldi (4-2) scattered seven singles, walked one and improved to 3-0 with a 0.94 ERA in three starts against Baltimore this season.

“I feel good going into the off-season,” he said. “Usually my arm and my body feel tired."

In his last four starts, the righty allowed only two runs in 21 innings. It was his 50th career big league win.

Eovaldi missed about 2 1/2 weeks this year with a strained right calf.

“It was a shame that we had that time where we had to put him on the IL with the calf,” Boston manager Ron Roenicke said. “He threw the ball really well and mixed up his pitches.”

Dean Kremer (1-1) was tagged for seven runs and seven hits over 2 2/3 innings in his fourth big league start. He had not given up more than one run and pitched at least five innings in his initial three.

“I think I just left too many balls deeper in counts, centre cut, and they got hit,” Kremer said.

J.D. Martinez’s RBI double halfway up the centre-field wall started the big third. Plawecki had a run-scoring triple and Michael Chavis an RBI double before Devers hit a line drive into the right-field corner, making it 8-0.

“I just think he had a tough time putting guys away tonight,” Orioles manager Brandon Hyde said of Kremer. “I just thought they were on a lot of his pitches tonight. He wasn't as sharp as he had been.”

Jackie Bradley Jr. and Plawecki had consecutive RBI singles in the first.

YEP, HE’S THE ONE

Roenicke started to avoid the question but agreed when asked if the club’s most valuable player this season had to be outfielder Alex Verdugo.

“I hate to make those comments because of the other guys, but yes he would,” Roenicke said before the game.

THAT SUMS IT UP

Baltimore fell to 1-22 when it scores three or fewer runs.

“It’s always tough when the offence and the pitching staff aren’t lining up,” Hays said.

Orioles: Hyde said: “we hope we dodged a bullet” on RHP Evan Phillips, who walked off the mound with right elbow soreness Tuesday night. … Hyde also said SS José Iglesias could be back this week. Iglesias missed his third straight game with a bruised left wrist after getting hit by a fastball from Tampa Bay’s Charlie Morton.

Red Sox: 2B Christian Arroyo returned to the lineup after missing the previous two games due to back spasms.