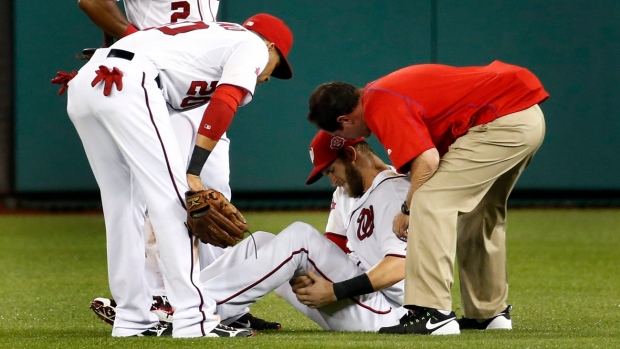 Manager Matt Williams said Harper had a mild strain and would be evaluated Friday. There was no estimate on how long Harper might be out or whether he would need to go on the disabled list.

The All-Star right fielder fell on the wet grass while trying to throw home on Asdrubal Cabrera's single in the sixth inning. As he planted to throw, his right leg slipped and his left leg buckled.

Harper held his left leg while down on the ground for a few minutes and then gingerly walked off the field under his own power, escorted by members of the Nationals' training staff.

Harper's throw went wildly into the dugout during a four-run inning for Tampa Bay. There had bene a 17-minute rain delay in the fourth.

Joey Butler homered and pinch-hitter David DeJesus had a two-run triple for the AL East-leading Rays, who took three of four in the home-and-home interleague set.

Chris Archer (8-4) won his fifth straight decision despite allowing three runs on a season-high eight hits in five innings. Brad Boxberger pitched the ninth for his 16th save.

Doug Fister (2-3) returned from the disabled list and allowed five runs and nine hits in 5 1-3 innings. It was his first start since May 14.

Yunel Escobar got five hits for the Nationals.

Harper is hitting .344 with 22 home runs and 52 RBIs. A two-time All-Star at 22, he has dealt several lower body injuries through his career, and had surgery his left knee after the 2013 season for a bursa sac.

Rays: Pregame rain prevented OF John Jaso (left wrist contusion) from taking on-field batting practice for the first time this season. "We wanted him out there and it didn't work out," manager Kevin Cash said. "He'll probably go ahead and take 500 swings now in the cage."

Nationals: RHP Stephen Strasburg (neck tightness) was throwing on the field the day after a rehab start, and will throw a bullpen in the next couple days. . RHP Aaron Barrett (bicep strain) hasn't returned to throwing after going on the DL last Friday, Williams said.