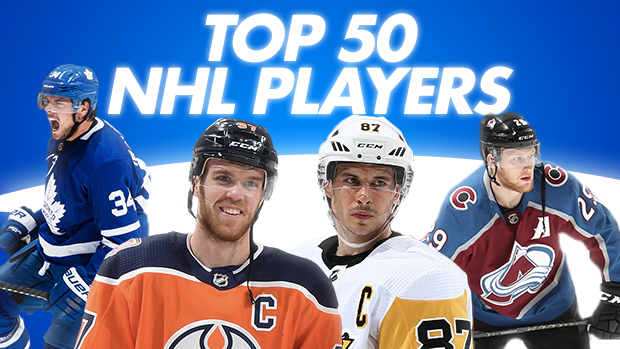 Connor McDavid may not have won a third consecutive scoring title in 2018-19, but he is TSN’s No. 1 ranked NHLer for a third straight year entering the 2019-20 season.

He was an overwhelming choice in the 10th annual TSN Top 50 player rankings.

McDavid was No. 1 on 91 per cent of voters’ ballots after achieving a remarkable standard last season that went largely unnoticed.

The Edmonton Oilers’ centre became just the fifth player in NHL history to earn points on more than half his team’s goals in games that he played.

McDavid collected 116 points on 222 Oiler goals, meaning he was in on 52.3 per cent of team goals in his 79 games. That puts him in the company of Mario Lemieux, Teemu Selanne, Jaromir Jagr and Wayne Gretzky as the only players to exceed 50 per cent in a single season (minimum 50 games).

But it was all-time great Sidney Crosby finishing No. 2 by the thinnest of margins – less than one per cent – in voting points. The Pittsburgh centre had a .29 per-cent edge over No. 3 Kucherov, winner of the Hart Trophy and Ted Lindsay Award last season.

Crosby ranked No. 1 the first seven seasons of the poll and has been No. 2 the last three.

Not far behind Kucherov was No. 4 MacKinnon, coming off a career-high 41 goals and 99 points, plus an electrifying playoff performance. Chicago Blackhawks right winger Patrick Kane placed No. 5 after scoring a career-high 110 points.

Ovechkin, who earned a league-record eighth goal title, returned to the top 10 after ranking Nos. 22 and 12 the previous two years. Marchand, who recorded his first 100-point season at age 30, has gone from No. 30 to 18 to 14 to 8 over the past four years.

Just outside the top 10 in voting at No. 11 was Edmonton left winger Leon Draisaitl, who joined Ovechkin as the only two 50-goal-scorers in the NHL last year.

The Lightning’s Andrei Vasilevskiy earned top goalie status, coming in at No. 20. Add in centres Steven Stamkos and Brayden Point at No. 19 and 24, respectively, and the Lightning has five of the top 25 players.

There are 11 players either new to the list or returning after an absence of at least one year. Point is the highest ranking of them.

Among returnees, nobody fell as far as Los Angeles Kings defenceman Drew Doughty (No. 10 to 39) and Washington centre Evgeny Kuznetsov (No. 19 to 48), both of whom plummeted 29 places.

Other prominent omissions include Winnipeg Jets’ right winger Patrick Laine, No. 23 in 2018; San Jose Sharks’ centre and playoff super scorer Logan Couture; and Dallas Stars’ goalie Ben Bishop, the only one of 12 players named to the first or second All-Star team not voted to the Top 50.

Philadelphia Flyers’ centre Sean Couturier is this year’s first runner-up. He ranked No. 51 in voting after making his Top 50 debut at No. 46 last year.