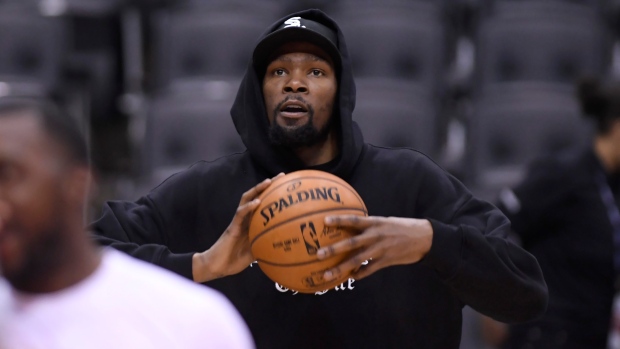 NBA players are getting back on the court.

As the COVID-19 pandemic continues to force a suspension of live sports, the NBA, National Basketball Players Association and 2K have partnered to bring you a player-led NBA 2K20 tournament beginning Friday on TSN at 8pm et/5pm pt.

Kevin Durant, Trae Young, Hassan Whiteside and Donovan Mitchell headline a 16-player field and the winner of the event will receive a $100,000 prize to give to the charity of their choice in support of coronavirus relief efforts.

Players were seeded one to 16 based on their overall rating in the game, meaning Durant – a 96 overall – takes the top seeding with Young (90) and Whiteside (87) grabbing the second and third spots, respectively.

Prior to the beginning of the tournament, participants will choose eight active NBA teams. Each team is allowed to be used once. If each player chooses to use the same team, the away side will be given first choice.

The first round will commence Friday night at 8:00 p.m. ET, with the quarterfinals going Tuesday and the semi-finals and finals taking place next Saturday. The opening round will be run as single-elimination, while the remaining rounds will be decided by a best-of-three series.

“We're thrilled to partner with the NBA and NBPA to bring basketball back to fans throughout the world and to help those in need during these uncertain times,” said 2K senior vice-president, sports strategy and licensing Jason Argent in a news release. “Entertainment, especially sports, has the ability to bring communities together – including athletes, fans and families – and we hope that everyone will enjoy the tournament.”

“This tournament offers a unique opportunity for our players to compete with one another while also supporting their philanthropic efforts and engaging with their fans,” said Josh Goodstadt, EVP of Licensing for THINK450, the commercial arm of the NBPA in the same release. “We are excited to work with 2K and the NBA to bring this experience to life for the entire NBA community.”

Here is the entire tournament field with seedings and player ratings: