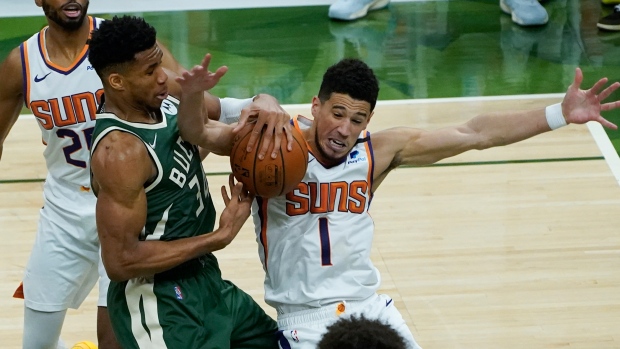 NBA fans rejoice, this series has the makings of a classic.

Last week, the Phoenix Suns reached -500 to win the championship.

In a season where arenas have been empty for most of the year, home-court advantage has taken centre stage in the NBA Finals. Cooped up fans have saved their vocal cords for letting it all out in the arena. No other player has been victimized more than Giannis Antetokounmpo, who’s shooting 9.4 per cent worse from the free-throw line on the road versus at home.

On Wednesday, Milwaukee answered the call in front of their home crowd playing two gritty games in a row. Last week, I mentioned three keys for a Bucks comeback. How’d they do?

1) Where’s Jrue? - Jrue Holiday gave the Bucks a desperately needed lift in Game 3, shooting 5-for-10 from three with a +22 net rating (best among all players). Even though he regressed mightily in Game 4, Khris Middleton stepped up and took the game back from the Suns.
2) Hone in on the Suns pick-and-roll - In the first two games, Deandre Ayton took 16 shots within the restricted area (80 per cent of his field-goal attempts). In Games 3 and 4, that number dropped to seven (35 per cent). Milwaukee did a great job keeping Ayton away from the rim and needs to continue that formula to steal one in Phoenix.
3) Keep attacking the paint - Milwaukee kept the trend going winning the points in the paint battle. 54-40 in Game 3 and 48-40 in Game 4.

The first four games of this series told us a lot. Now, the defence is going to be tighter, and advantages will be exploited by both sides.

Here are three prop bets to consider based on what we’ve seen so far:

Pick your poison, but it’s going to seven

As mentioned above, Phoenix is priced at -155 to win the series, Milwaukee is +135. Decent odds, but regardless of who you like, I think there’s more value basking in the assumption this goes seven.

Outside of Game 1 versus Atlanta where Trae Young snatched the game with a 48-point gem, Milwaukee has won all nine other home games.

Phoenix has a similar track record having won 8-of-10 at home.

As it stands, these are the series correct score odds for either team winning a best-of-seven:

Three-point shooting variance can totally skew your opinion of a player. If you only watched Game 1, you would’ve raged about Crowder’s 0-for-8 performance and called for more Cameron Johnson. Three games later, he’s averaging 3.0 threes a game on 46.2 per cent shooting, the best of any player on both teams.

Expanding both their splits to the entire playoffs, there’s clear correlation to their performance at home versus on the road.

Crowder excels on the road shooting 48.6 per cent from three versus 27.1 per cent at home. He also takes 1.1 fewer attempts in Phoenix.

Over their 20 playoff games, Bridges has twice as many three-pointers at home versus on the road. He’s hit 22 threes in Phoenix, 10 on the road.

Betting threes can be a crapshoot sometimes but if you want a parlay based on shooting data, here’s one to consider:

If it wasn’t for Booker’s red-hot shooting in Game 4, we would’ve seen a whole lot of Abdel Nader and E’Twaun Moore.

Even with solid defence from the Bucks, Booker remained unfazed, draining one tough shot after another.

Throughout these finals, Booker has led the Suns in field-goal attempts all four games and averaged 29 points in their two wins.

With Chris Paul looking out of sorts last game, I can see Phoenix leaning on Booker to go heat-check mode and will them to a win.

Baking in the assumption that this series goes seven, I don’t see the Suns losing this game. If you like Booker for Game 5 as I do, here two lines to explore: