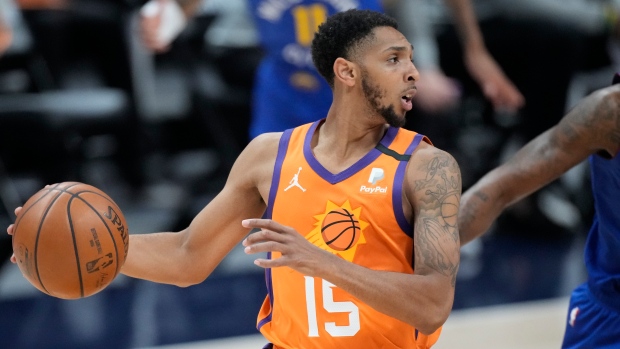 He's just 6-foot-1, but has wiry strength and as soon as he gets the basketball, he's off and sprinting down. It might be a pass. It could be driving lay-up. And if he shoots one of his unorthodox, left-handed 3-point heaves, the shot goes in more often than it looks like it should.

Payne plays so fast it looks like he's making up for lost time.

Payne has revived his career with the Suns, providing valuable minutes as second-team All-NBA point guard Chris Paul's backup. He's a major reason Phoenix has advanced to the Western Conference finals for the first time since 2010, where the Suns will face the winner of the Utah Jazz-Los Angeles Clippers series.

Now with Paul in the COVID-19 protocol and his playing status uncertain, the Suns may rely on Payne even more. Judging from the past several months, Payne will be ready.

“I've found my niche on a great team," Payne said. “I just want to keep pushing that forward. You've got to be humble and stay hungry. Because you can be out of this league in a heartbeat and I don't want that to happen again.”

The 26-year-old Payne was the No. 14 overall pick in the 2015 draft by the Oklahoma City Thunder but lasted just 1 1/2 uninspiring season before being traded to the Chicago Bulls. He didn't play much there either and after that, there were short stints with the Cavaliers, Raptors and even a couple games in China.

Then — almost out of nowhere — the Suns added him to the roster before the NBA bubble restart in 2020. Suns coach Monty Williams was an assistant in Oklahoma City when Payne was a rookie and thought there could be untapped potential.

He was right. Phoenix won all eight games in Florida and just missed the playoffs. Payne played well in a big role, averaging 10.9 points and three assists.

“It's been crazy,” Payne said. “It's been a real scary roller coaster for me. I didn't know where I was going to be, but I've found a home and I want to stay here as long as I can. Going out there and playing as hard as you can, you end up in good positions.”

Payne said he's leaned on the support from his family during the tough times and they're a constant presence in the stands at Phoenix Suns Arena. They're enjoying the guard's resurgence and playoff run just as much as Payne.

“When you’re in a marriage that works, it’s just awesome,” Payne's dad Tony said. “Phoenix is good for him, and he’s good for Phoenix. The style of play really fits, they allow him to be up tempo, he sees the floor real well. Phoenix plays a wide open style and allows him to shoot the 3.”

Payne was a solid contributor all season for the Suns, averaging 8.4 points and 3.6 assists, but his real value became apparent during the team's first round win over the defending champion Los Angeles Lakers.

Paul suffered a shoulder injury in Game 1 which forced him into a lesser role. Payne picked up the slack, scoring 12.5 points per game and providing toughness in critical times against the Lakers and LeBron James.

He even got ejected in Game 1 after a scuffle with Alex Caruso and Montrezl Harrell. While not his intent, it was another piece of evidence of Payne's newfound confidence and passion. He played much of the series with a black eye, further cementing his never-give-in persona.

The underdog mentality has always suited Payne, who was only about 5-foot-8 until a growth spurt midway through high school. He played on one of the best AAU teams in Memphis, Tennessee, but didn't attract much interest from Division I coaches. Murray State was one of the few that was interested.

He was coached at Murray State by Steve Prohm, who said Payne's experience at perseverance has come in handy.

“He always had a chip on his shoulder and played with swag,” Prohm said. “He’s doing that every day. I watched one of his interviews the other day and I texted him just to say how impressed I was. It’s fun to watch.”

Even if Paul can play in the Western Conference finals, Payne's role will still be prominent. He's often the first player off the bench and scored about 7 points per game in the team's second round sweep of the Denver Nuggets. His herky-jerky style has been a perfect compliment to Paul's smoother moves and Payne will often hit a few big shots in succession.

“For some reason, I score in bunches," Payne said. “If I hit one, I've got to try it again. If it goes in again, then I'm feeling it. I just try to stay aggressive — that's a big key to my game."

Tony Payne says that one reason his son has thrived in Phoenix is he's using the lessons learned from the previous seasons. Even if there were tough times, he was fortunate to learn from some of the NBA's best, including Russell Westbrook, Dwyane Wade and now Paul.

“Cameron's got a certain skill set,” Payne said. “I think it just took him some time to figure out what he was supposed to be doing on the court. Now he understands what the coaches are asking from him.”