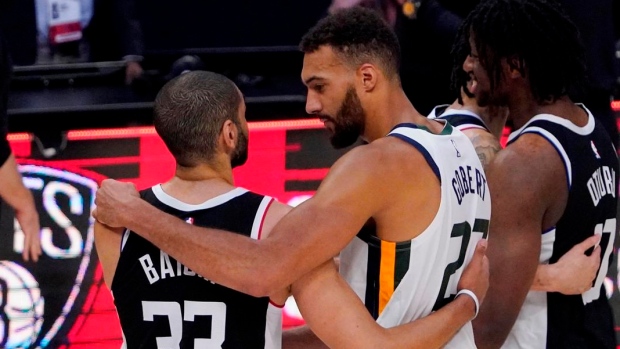 SALT LAKE CITY (AP) — Once again, the Utah Jazz endured a postseason collapse. Making an early exit from the NBA playoffs stung much more this time.

The top-seeded Jazz fell to the Los Angeles Clippers in six games after blowing a 2-0 series lead. Injuries to All-Stars Donovan Mitchell and Mike Conley, coupled with defensive deficiencies exposed by the Clippers’ small-ball lineups, took down a Utah team after a dominating in the regular season.

For a team that surrendered a 3-1 series lead to Denver a season earlier, this latest postseason setback left an extra bitter taste.

“This hurts more than last year because we were up again and lost again,” Mitchell said. “This is going to eat at me. Even when I go to the grocery store, I’m going to be thinking about it.”

Mitchell took another step forward during the postseason as a rising superstar for the Jazz, even while playing through pain after reinjuring his right ankle early in the series against the Clippers.

The two-time NBA all-star missed Utah’s final 16 regular-season games after spraining his ankle in mid-April. He finally returned to action in Game 2 against Memphis in the first round.

Mitchell ended up averaging 32.3 points, 5.5 assists, and 4.2 rebounds during the playoffs. He had 39 points, nine rebounds, and nine assists – while making nine 3-pointers – in his final game against the Clippers, becoming the first NBA player to post that stat line in a playoff game.

“He’s a warrior,” Jazz coach Quin Snyder said. “It’s a unique player that has the competitiveness and the desire to play through that type of pain.”

The Jazz had a league-leading +9.3 net rating and held opponents to 107.2 points per game during the regular season. Their strong defense struggled in the postseason, however, when facing smaller lineups peppered with versatile athletic players.

Against Los Angeles, Utah surrendered 125.0 points per game over four straight losses that ended its season and allowed the Clippers to shoot at least 56% from the field in two of the four consecutive defeats.

The Jazz surrendered a 25-point third-quarter lead in Game 6 after allowing Los Angeles to score 81 points on 45 possessions.

Now Utah will spend an offseason doing some soul searching and figuring out what the next step forward needs to be for the franchise.

“Obviously, we had higher expectations than losing in the second round, so it’s painful,” Rudy Gobert said. “You try to ask yourself the right questions and try to think what we can do so it stops happening.”

One of the biggest offseason questions facing the Jazz is at point guard. Conley is set to become a free agent and bringing him back is expected to be a team priority.

His health could be a determining factor in the size and length of the contract offer. Conley struggled with recurring hamstring injuries during his two seasons in Utah. A hamstring strain caused him to miss all but one game in the series with the Clippers.

When healthy, Conley ran the offense smoothly and efficiently. His presence freed up Mitchell and Gobert to have a greater impact on offense and defense, respectively. Conley also earned his first career NBA all-star nod this past season after averaging 16.2 points and 6.0 assists in 51 regular-season games. He also offered valuable leadership on the court and in the locker room.

For his part, Conley expressed a willingness to continuing his career with the franchise. He enjoyed being part of the Jazz over a pair of up-and-down seasons.

“Obviously, I can’t speak, look into the future and know exactly what will happen,” said Conley, who spent his first 12 seasons with Memphis. “(This is) actually my first time being a real free agent, so it will be interesting. But I did love it here. We’ll see what happens.”

Multiple trades and/or signings could be ahead for Utah going into the offseason if the Jazz decide to reshape the roster to shore up defensive shortcomings that surfaced during the playoffs.

In addition to Conley, Georges Niang is a key free agent. Niang carved out a spot in Snyder’s nine-man rotation with his outside shooting and improved perimeter defense. The forward averaged a career-high 6.9 points in 16.0 minutes per game, while shooting 42.5% from the field, but struggled on both ends of the court in the postseason.

Joe Ingles could offer some useful trade value during the offseason. The veteran guard is owed $14 million entering the final year of a four-year deal he signed in 2017. Ingles has emerged as one of the league’s top outside shooters – and shot a career-best 45.1% from long distance this season – but might be expendable in a search for long, versatile, athletic wings to shore up Utah's perimeter defense.

Multiple Jazz players will switch gears and join their national teams for the Tokyo Olympic Games later this summer. Ingles confirmed his plans to play for Australia. Bojan Bogdanovic will play for Croatia. Rudy Gobert will play for France.

Mitchell and Conley are both questionable to join Team USA while rehabbing from their late-season injuries. Conley expressed his interest in taking part if his hamstring is healthy.