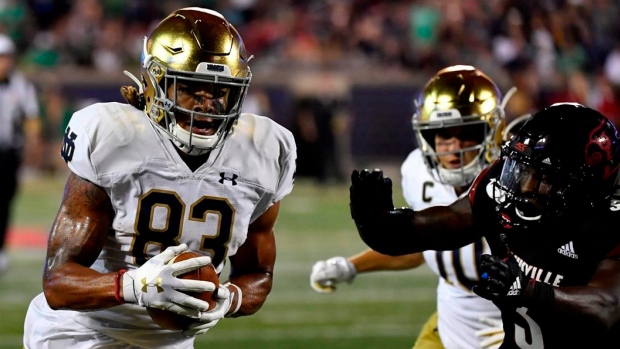 It may be known as ‘National Signing Day’ in the U.S., but the first opportunity for football prospects to sign their NCAA letters of intent has an increasingly international flavour to it.

In Canada, it’s expected more than 20 players will sign with NCAA schools between Wednesday and Friday in what is known as the early signing period.

Meanwhile, in Berlin, Germany, a group of 13 players will gather for what could a truly international signing day, with players from seven countries expected to commit in writing to their schools.

“There are kids that are ready to go [to top programs] from Europe are good enough to go directly from their own countries,” said Brandon Collier, the founder of Berlin-based PPI Recruits, a scouting service that runs camps throughout Europe to identify players with college potential. “The development is there in these countries. They just need someone to develop and push them. And when kids see that they don’t have to go to [high school in America] to become a starter in college football, they’re seeing we may be doing the right things at home.”

The NCAA buzz beyond American borders is another sign of the globalization of football that has seen Canada, and now Europe, turn into fertile recruiting ground for some of the biggest programs in the U.S.

Both Claypool and Gallimore are expected to be drafted in the upper rounds of this April’s NFL Draft and could be joined by another Canadian, Oklahoma State running back Chuba Hubbard, who has yet to decide whether he is returning to school or entering the draft.

Among the highest-rated Canadian players expected to commit this week are receiver Ajou Ajou of Brooks, Alta., who is committing to Clemson, tight end Theodore Johnson of Windsor, Ont., to Penn State and defensive tackle Lamar Goods, son of former CFL player Bennie Goods, of Fort McMurray, Alta., who will commit to Florida.

“I think, in recent recollection, it may be the deepest class of Canadians ever,” said Lee Barrette, CEO of Canadafootballchat.com, a leading high school football recruiting site. “There are others that may compare at the top end, but I believe is the deepest ever.

“Kids are participating more against American competition, getting to that level and showing the scouts that the kids are good enough to get scholarships.”

Meanwhile, talent coming from Europe has started to surface in the NCAA, with Collier citing a half-dozen of his players who held starting jobs this season at schools like Notre Dame, Cincinnati, Temple, Georgia Tech, Towson, Duquesne, and Connecticut. All of them are either freshmen or sophomores.

“This is the first wave of kids,” said Collier. “It’s only going to grow and grow as the pipeline fills.”

The signing day event in Berlin is another step in the development of European football culture Collier has been working to cultivate since he started bringing players across the ocean for college camps three years ago.

It’s expected European players will sign this week at such schools as Syracuse, Temple, Arizona, West Virginia and the University of Houston.