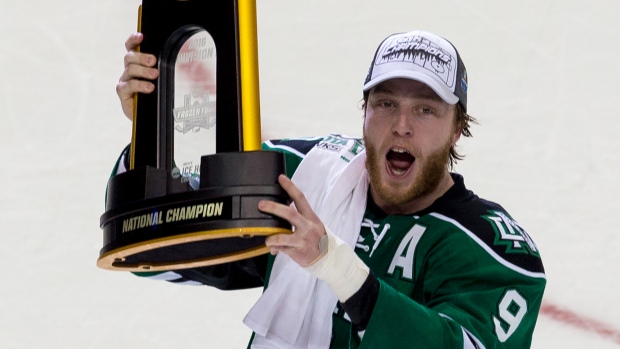 McKenzie reported on Friday night that the Vancouver Canucks, a team also believed to be in the hunt for the player, were told that they had missed out on him and the Pickering, Ontario native has selected the Oilers.

The 21-year-old forward has played with the University of North Dakota for the past four seasons and posted 25 goals with 26 assists for 51 points over 39 games in 2015-16.

The undrafted Caggiula is a hot commodity after putting up great numbers during this year's Frozen Four tournament in Tampa Bay. He won the Frozen Four's most outstanding player award after netting four goals and one assist in two games, including two tallies in the championship final.

Earlier on Friday, McKenzie reported that an American team interested in Caggiula were told that the player had chosen to sign with a Canadian club. Along with the Oilers and Canucks, McKenzie indicated there was interest from the Ottawa Senators.

Caggiula's choice to sign with the Oilers comes as a bit of a surprise. TSN Senior Hockey Reporter Frank Seravalli notes that there was belief that he had soured on the Oilers during the process, but was bowled over after meeting with the organization and visiting the brand-new Rogers Arena.