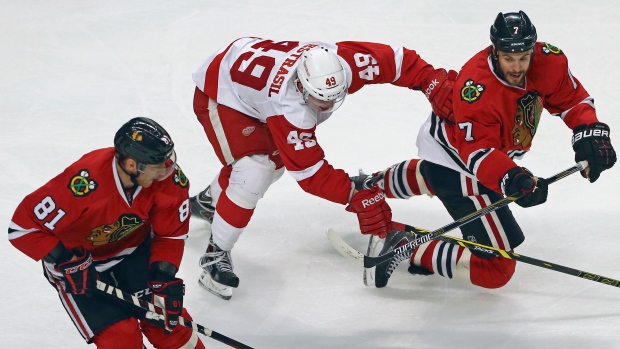 DETROIT - Andrej Nestrasil and Tomas Nosek each had a goal and an assist and the Detroit Red Wings held off the Chicago Blackhawks 3-2 in an exhibition game Thursday night.

Bryan Bickell and Garret Ross scored for Chicago (1-1-0). Antti Raanta stopped 21 of 22 shots in the first period and half, and Michael Leighton made 17 saves on 19 shots.

Tatar scored his second goal of the preseason late in the first period, and Nosek scored early in the third.

Bickell put the Blackhawks on the board at 6:28, and Nestrasil got his goal midway through the third period.

Ross scored in the final minute.

The start of the game was delayed for 48 minutes because of a mechanical problem with Chicago's plane.