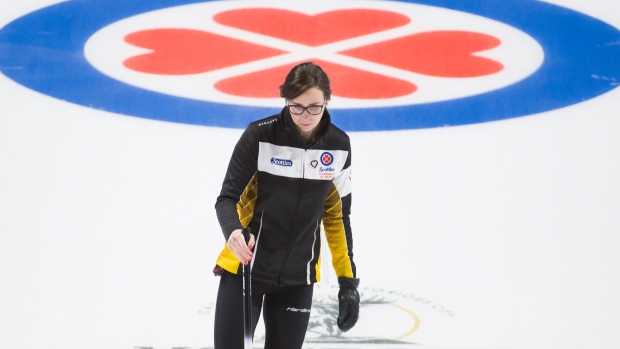 MOOSE JAW, Sask. – History was made Tuesday afternoon on Day 5 at the Scotties Tournament of Hearts.

New Brunswick’s Andrea Crawford tallied seven points in the seventh end against Manitoba to set a new Scotties record for most points scored in a single end.

After some misses by undefeated and top-ranked Manitoba, led by Kerri Einarson, Crawford basically had an open hit to score her seven points. They would go on to win 13-7, handing Manitoba its first loss at the Canadian women’s curling championship in the process.

“We said after the end that it was one of those ends that kind of crept up. We definitely didn’t see it coming until the end. Just a couple of little misses on their part that allowed us the open shot,” said Crawford.

The 34-year-old human resources manager says she can’t remember putting up a seven-ender before today.

“Never had a seven-ender. If I ever had an eight-ender, it was a long time ago, maybe in juniors,” she said.

“We had a good game last night and our goal today was just to build on last night’s game, so I think we’re happy with how we did that,” she said. ​