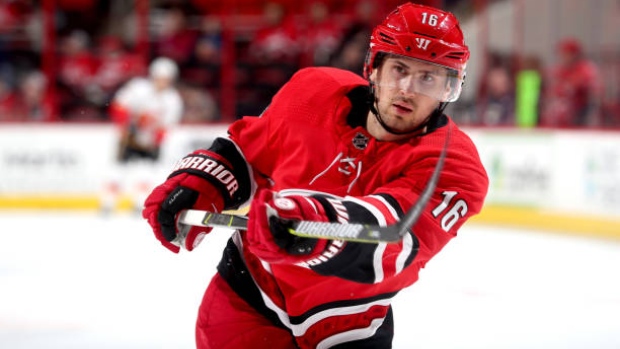 Marcus Kruger struggled mightily this season with the Carolina Hurricanes, posting one goal and six points in 48 games and spending 19 games demoted in the AHL.

The Arizona Coyotes acquired Kruger for winger Jordan Martinook - while upgrading their fourth-round pick in June's draft to the third round - and general manager John Chayka believes there's strong reason to believe the 27-year-old centre will bounce back next season.

Chayka revealed during a conference call Thursday that Kruger played the 2017-18 season with a sports hernia injury that required surgery last month.

"You take (the injury) into consideration, but at the same time you think he got a repair done (where) the recovery is pretty straightforward," Chayka said, per the Arizona Republic. "We think that’ll get the jump back in his skate and it’ll be a real useful and helpful piece to our lineup."

Kruger was traded to the Vegas Golden Knights in an expansion draft deal last June and later sent to the Hurricanes. Signed at a cap hit of $3.08 million through next season, he scored a career-high eight goals and 28 points with the Chicago Blackhawks during the 2013-14 season.

Chayka said Thursday he believes Kruger will also bring leadership to the Coyotes.

"We’ve got some young wingers and we think that having his stability up the middle is going to be really important for our group," Chayka said.  "He’s a high-character guy, hard-working on the ice but also hard-working off the ice. Very detailed with his regimen and a lot of things that we want to bring to our locker room for our young players to learn from."