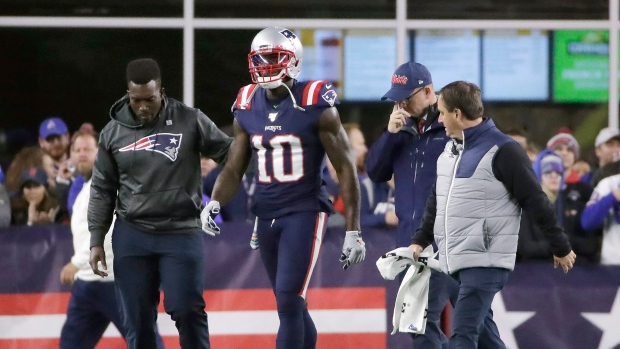 The New England Patriots have placed wide receiver Josh Gordon on the injured reserve due to his knee injury.

The 28-year-old hurt his knee in the Patriots Week 6 game against the New York Giants while he was making a tackle after a Tom Brady interception.

Despite being placed on the IR, Albert Breer of Sports Illustrated's The MMQB is reporting that Gordon's knee injury is "minor" and is expected to be medically cleared soon.

Source says Patriots WR Josh Gordon expects to be medically cleared soon, and that his knee injury is "minor". I was told he ran 22 MPH on the treadmill during a rehab session today.

Once he's cleared, he hopes to be released off of IR and sign with a new team.

Breer adds that he was told Gordon ran 22 MPH on the treadmill during a rehab session on Wednesday.

ESPN's Filed Yates added that the Patriots could negotiate an injury settlement off of IR with Josh Gordon, this would make him a free agent and allow him to sign with a team and play again this season.

One possibility to mention/update: the Patriots could negotiate an injury settlement off of IR with Josh Gordon, which would then open the door to him signing with another team and paying again this season once healthy. https://t.co/aXdi3nW711

The news comes one day after New England acquired WR Mohamed Sanu from the Atlanta Falcons.

In six games this season, Gordon had 20 catches for 287 yards and one touchdown.

If New England cuts him following Tuesday's trade deadline Gordon will have to go on waivers. Meaning the Miami Dolphins would get the first chance to claim him, according to NFL Network's Tom Pelissero.

All players go through waivers when released starting next Wednesday (the day after the trading deadline). So, even though Josh Gordon is a vested veteran, he’d go on waivers if the #Patriots cut him off IR after that ... meaning the likes of the #Dolphins would have first crack.

The wide receiver was first-team All-Pro in 2013, leading all players with 1,646 receiving yards – the 14th highest total in a single season in NFL history. But a lot has happened since his stellar 2013 season as Gordon struggled to stay on the field due to several off-field issues.

The star wide out missed all of 2015 and 2016 due to violation of the league’s substance abuse policy. Gordon returned to action in Nov. 2017, and after just one game in 2018 he was traded by Cleveland to New England, where he found success. In 11 games he brought in 40 receptions, three touchdowns and averaged 18.0 yards per reception.