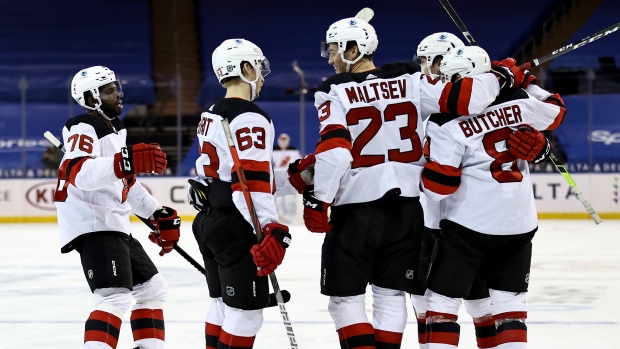 NEW YORK — Yegor Sharangovich and Nicholas Merkley scored in the third period, and the New Jersey Devils sent the New York Rangers to their fourth straight loss with a 5-2 win on Tuesday night.

Pavel Zacha, Will Butcher and Mikhail Maltsev also scored for New Jersey, which returned to action for the first time this month after an extended pause due to a COVID-19 outbreak. Mackenzie Blackwood made 37 saves and Janne Kuokkanen added three assists in the win.

“I think most important thing for us tonight was to come out and try to play a solid game and get our legs back,” Blackwood said. “Getting the win was huge also. I think those were the two things we focused on tonight and we accomplished both of them.”

“That’s a team coming off a two-week break. I realize they probably were pretty excited to get back to playing hockey, but that’s an unacceptable start,” alternate captain Chris Kreider said. "For the majority of the game they outhit us, outskated us, outworked us, won more battles. I mean, chances aside we got away from the things that we were doing well. They flat-out wanted it more. I mean, it’s unacceptable.”

Sharangovich scored the go-ahead goal at 10:43 of the third period when he redirected P.K Subban’s shot from the point past Shesterkin. Jesper Bratt assisted on the play.

Merkley extended the Devils third-period advantage to two goals at 14:09 with his first of the season. The 23-year-old winger forced a turnover in the offensive zone and scored on a blast from the slot.

“We just always want to be aggressive, hound their D,” Merkely said. “I think that’s what our line did tonight, all night. Good things happen when you get D-men under pressure.”

Butcher gave the Devils a brief 2-1 lead when his shot from along the wall deflected in off Rangers defenceman Jacob Trouba at 17:14 of the second period.

The Rangers responded in the final minute of the second as Buchnevich recorded his fourth goal of the season. Alternate captain Chris Kreider forced a neutral zone turnover and set up Buchnevich, who knotted the game at 2-all. Trouba assisted on the play.

“We’ve got to understand the difference between winning and losing and what you need to do to do it,” Rangers coach David Quinn said. “You would think we would generate some momentum getting that goal at the end of the second. It just didn’t happen. A lot of things didn’t happen tonight for us.”

Zacha opened the scoring at 7:37 of the second with a power-play goal. The 23-year-old winger wired a wrist shot from the right circle over the glove of Shesterkin. Damon Severson and Kuokkanen assisted.

The Rangers’ streak of 22 consecutive successful penalty kills over the past seven games ended on Zacha’s goal.

Blackwell evened the score at 1-1 with a well-placed wrist shot that clipped the post before finding the back of the net. Brett Howden intercepted a pass in the offensive zone and slid the puck over to Blackwell at 11:32 of the second frame.

Maltsev added an empty-net goal in the final minute.

Rangers forward Artemi Panarin missed his second straight game due to a lower-body injury he sustained against the Bruins last week. Rookie defenceman K’Andre Miller didn’t play for New York due to an upper-body injury sustained during practice.

The Devils’ last game prior to Tuesday was January 31st against the Buffalo Sabres. New Jersey had 19 players land on the NHL’s COVID-19 list during its pause. The NHL announced several schedule changes as part of the reshuffling due to multiple postponements.

Travis Zajac, currently on the NHL COVID-19 list, is two games shy of becoming the fourth player to skate in 1,000 games with the Devils, joining goaltender Martin Brodeur, Ken Daneyko and Patrik Elias.