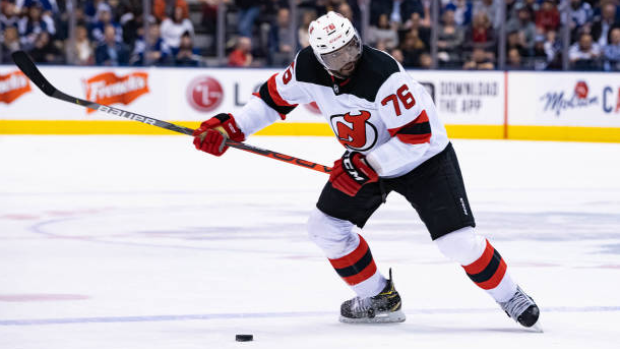 New Jersey Devils defenceman P.K. Subban said Tuesday he has no plans to request a trade from the struggling club.

Subban is in his first season with the Devils, who sit last in the Metropolitan Division, after being traded from the Nashville Predators last summer.

"Listen, in my career to this point, I've never asked for a trade and it's because maybe I'm a little bit old school that way," Subban said. "I've learned from a lot of veteran players in the league that put their head down, come to work and do their job. And I'm getting paid to do a job, I have to come and do it every day."

Subban has been traded twice in his NHL career, having been dealt to the Predators from the Montreal Canadiens in exchange for Shea Weber in 2016.

"The business is the business, you know?" Subban said. "But as far as me, I love my teammates here. I love the guys, it's a great group. It's fun to come to the rink every day."

It's been a trying season for the Devils, who traded winger Taylor Hall and fired head coach John Hynes last month and then fired general manager Ray Shero this past week, but Subban sees reason for optimism with the club.

"As frustrating as the season has been on the ice, we actually get fired up and are excited to play every game," Subban said ahead of the team's 7-4 loss to the Toronto Maple Leafs. "I think that's partly because we have young players on our team; some of these guys haven't even played in this arena yet. So it's exciting every night to come the rink and know guys have that energy, and I'm an energetic guy, so when you have guys around you that have energy too, it's fun to play the game and go on the road, and I think we're looking at these next games as challenges and we're taking them head on."