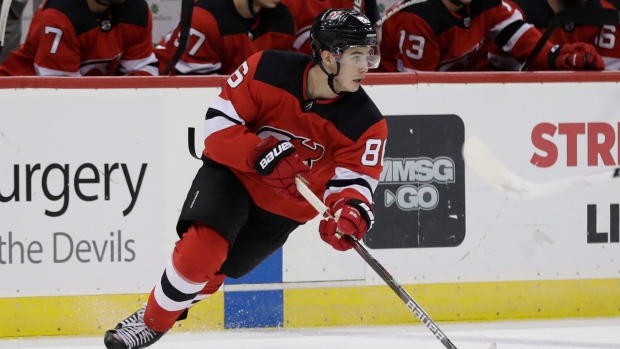 The New Jersey Devils' season began with great expectations with the return of an injured MVP, a trade for a Norris Trophy-winning defenceman and the addition of a second No. 1 overall draft pick in three years.

It also ended with high hopes.

In between was ugly. There was a horrible start that led to the firing of coach John Hynes. Taylor Hall, the 2018 league MVP, was traded weeks later. General manager Ray Shero got canned in January and top pick Jack Hughes had a dismal rookie season.

Coupled with a lack of secondary scoring and no net-front presence on defence, it's not surprising New Jersey missed the playoffs for the seventh time in eight years in a season paused in March by the pandemic.

“Early on, the wheels started to fall off and there was changes made,” interim general manager Tom Fitzgerald said Thursday. “Finally, you saw a team that was coming together at the end of the year. It was too late. So here we are. We can discuss many reasons why. I don’t think we need to. I just think we just have to put our best foot forward and move on and look at some of the positives.”

The biggest positive was the Devils turned things around after Alain Nasreddine took over as interim coach on Dec. 3. After an 0-4-1 start, they went 19-12-7 between the middle of December and their final game on March 10, a 5-2 loss to Pittsburgh. Had they won that game, they would have been among the 24 teams scheduled to return next month from the NHL pause.

Nasreddine believes the Devils can make the playoffs next season.

It will take work. Nico Hischier and Hughes — the recent No. 1 overall picks — have to get better. Goaltender Mackenzie Blackwood has to build off a good season and guys such Kyle Palmieri, Damon Severson, Jesper Bratt and Nikita Gusev have to continue to deliver.

The next step is for one of the NHL's youngest teams to live up to the expectations.

“We talk about the future and what could be but at some point we have to do it, to go on the ice and prove that you're a good team and then a great team,” veteran goaltender Cory Schneider said. “We have not been able to do that unfortunately and that is a challenge. It's the next step in the evolution of guy’s careers. Do you want to be a guy that just plays or do you want to be a guy who plays in the playoffs and is in big moments?”

Next season will tell.

More than three months after the pause, Fitzgerald and Nasreddine still don't know what they will be doing next season.

Owners Josh Harris and David Blitzer have not decided whether to take the interim tags off their jobs or hire new people.

Fitzgerald confirmed reports the team has interviewed people for the head coaching job.

Hischer really stepped up after Hall was traded and played like a first-line centre. The 21-year-old finished with 14 goals and 22 assists in 58 games. Palmieri had team highs of 25 goals and 45 points. The 27-year-old Gusev came on late and had 31 assists and 44 points in his first NHL season.

Hughes showed plenty of skating skills and the ability to get into scoring position. The recently turned 19-year-old had a ton of chances but finished with seven goals and 14 assists in 61 games, and a team-high minus-26 differential. Defenceman P.K. Subban, the 2013 Norris Trophy winner, struggled most of the season, finishing with seven goals, 11 assists and a minus-21.

The Devils need to shore up the back line with a tough stay-at-home defenceman and add scoring. They should have more than $25 million in cap space. They also may have as many as three first-round picks (Arizona, Vancouver) in what is considered a very good draft.

GOALIE OF THE FUTURE

Despite playing with a suspect defence, Blackwood was outstanding. He posted a 22-14-8 record with a .915 save percentage and a 2.77 goals-against average.

Schneider woke up late in the season and would be a good backup if he does not regress.

Two years after leading the Devils to their first playoff berth in five seasons and being the league's MVP, Hall became a casualty of the season. He was traded to Arizona for three prospects and a conditional first-round pick.

New Jersey will get the Coyotes' first-round pick this year if it is not in the top three. The prize of the prospects is soon-to-be 20-year-old Kevin Bahl. He is tough, 6-foot-7, 240-pound defenceman who has been dominant in junior hockey.