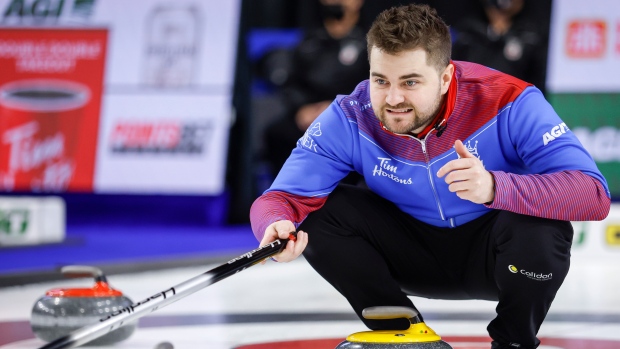 The season-ending Champions Cup served as a farewell event for many top Canadian curling teams. With all but a handful of rinks making lineup changes, a program may be needed when the new campaign kicks off in a few months time.

Announcements have been so frequent in recent weeks it can be hard to keep track.

Both teams at the top of the national rankings are making changes with Brett Gallant leaving Brad Gushue's rink and Tracy Fleury's team going its separate ways.

Change is coming for the rest of the men's top five as well. Meanwhile, Kerri Einarson's team — the three-time reigning national champions — is the only rink in the women's top five that will see its full lineup return in its current form.

Einarson's team capped the season last Sunday with a victory over South Korea's Eun-Ji Gim in Olds, Alta. Gushue took the men's title at the Grand Slam event with a win over Kevin Koe, whose team will also have a different look next season.

"It was a bit weird and certainly emotional," said lead Ben Hebert, who played with Koe for the last eight years. "Now you get a couple days after it and the excitement starts going."

"As much as it's exciting for the individual players to go play with new teams and (have) a refresh after a long and weird quadrennial with COVID and all the (BS), I think it's exciting just for curling as a sport — curling fans in general and also the curlers — to watch the new teams play," Hebert said Tuesday.

"I mean I get sick of watching Koe and Gushue for Christ's sake, so I can imagine what everyone else thinks. And I'm on the team."

Teams skipped by Jason Gunnlaugson, Mike McEwen and Matt Dunstone are some of the other top teams that are making changes, while skip Brad Jacobs announced he plans to take a year off.

"It's fun for the sport I think, the fact that we have this kind of turnover and new people getting together," said Dunstone, whose new team includes B.J. Neufeld, Colton Lott and Ryan Harnden.

"It gets people talking about the sport so I think for the sport as a whole, it's really good."

The new-look domestic women's scene will also be intriguing.

Jennifer Jones will skip the Mackenzie Zacharias team, making it a five-player lineup. Jones third Kaitlyn Lawes is skipping a new team, Fleury is joining forces with Rachel Homan's side and Laura Walker is going to focus on mixed doubles.

"I'm excited to see how Tyler Tardi does with Kevin because the truth of the matter is none of us know."

A busy off-season awaits as teams firm up sponsorship plans, figure out training schedules and begin plotting for the fresh quadrennial.

There are some competitions on the calendar as early as August but most teams will start ramping up in September. The Oct. 4-9 National in North Bay, Ont., will be the first Grand Slam event of the new season.

"At the end of the day I think Canadians are just tired of not finishing on top of the podium like we're used to," Dunstone said. "That's where all these changes are coming from. People are trying to put themselves in the best position to ultimately win the Olympic gold or win the world championship gold, whatever it may be.

"Just trying to get Canada back on the top of the podium. I think we're all pretty tired of losing here."

Canada won double gold at the Sochi Games in 2014 (Jones, Jacobs) but hasn't reached the top step in Olympic four-player team competition since.