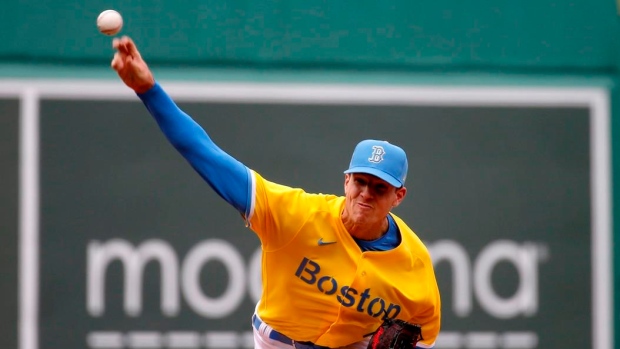 The uniforms — lacking any red — honour the Boston Marathon with the colours that stretch across the finish line of the famous race. They featured yellow tops with powder-blue lettering across the front, numbers on the back and caps, with white pants.

Boston was the first of seven big league teams that will don a new City Series look this season, and will wear them this weekend. The Marathon, usually held on Patriots’ Day in conjunction with an 11 a.m. start for the Red Sox at Fenway Park, was moved to Oct. 11 due to the pandemic.

Xander Bogaerts and Kiké Hernández each had a double and three singles for the Red Sox. Bogaerts’ double drove in two runs in the eighth that carried Boston to its 10th win in 11 games.

Gonzalez homered into Boston’s bullpen off Cody Heuer (1-1). J.D. Martinez drew a bases-loaded walk off reliever José Ruiz before Bogaerts’ ground-rule hit dropped in down the right-field line before bouncing into the stands.

“This is a pretty good team, a pretty special team,” Gonzalez said.

Chicago right fielder Adam Eaton robbed Rafael Devers of a homer when he made a leaping grab before crashing into the wall and hit an RBI double. José Abreu added an RBI double and two hits.

“I think he's been one of the guys that's been most consistent,” White Sox manager Tony La Russa said of Eaton. “He made a great play.”

“I guess at this point in the season we're not going to freak out about the record and why we're losing games and why we're under .500,” catcher Zack Collins said.

Adam Ottavino (2-1) struck out all three batters he faced for the victory.

Friday night’s series opener was postponed due to snow and rain. It’s scheduled as the nightcap of a split admission doubleheader on Sunday.

Cora enjoyed reflecting before the game about La Russa, who worked with him as a special assistant for Red Sox President Dave Dombrowski.

“He meant so much in 2018 and ’19. It was always cool to go out to dinner … just listening to those guys talking about their experiences,” Cora said. “(La Russa) would always leave me a letter after each homestand that I could read on the plane — the things that we could do better. That’s the way he put it.”

Lefty Carlos Rodón, who threw a no-hitter in his previous start on Wednesday, was originally slated to start Monday morning’s Patriots’ Day game, but the team lists righty Lucas Giolito (1-0, 2.55) with everyone getting pushed back because Friday’s game was called.

White Sox: Cease was reinstated off the IL (precautionary reasons) after a series of negative tests for COVID-19. … Moncada walked around gingerly after hustling to third and diving back on Abreu’s double but stayed in the game.

Red Sox: Cora said he planned to give Bogaerts Friday off, but with the postponement he was in the lineup.