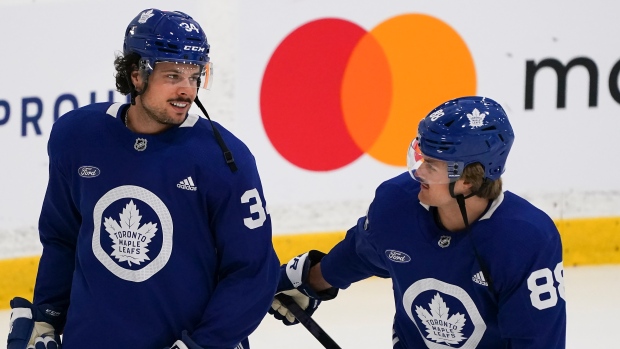 TSN Toronto Reporter Mark Masters reports on the Maple Leafs, who skated in two groups at Ford Performance Centre on Tuesday ahead of Wednesday’s preseason game against the Senators in Ottawa.

General manager Kyle Dubas says Harden will help everyone in the organization "be at their best in moments when pressure comes."

Harden started working at the University of Michigan in 1986 as a student-athlete counsellor. Legendary football coach Bo Schembechler initially brought him in after hearing about the work Harden was doing in the community. Since then, Harden has mentored star athletes like Tom Brady, Desmond Howard, Jalen Rose and Michael Phelps.

"You don't really hire somebody like Greg Harden," head coach Sheldon Keefe noted. "He decides whether or not he wants to come work with you and we were fortunate he decided to join us."

After 34 years at Michigan where he served as associate athletic director and director of athletic counselling, Harden retired last year.

"He's got great experience and comes in with a fresh voice, fresh set of eyes in terms of what's happening here," said Keefe. "He's a guy who will take his time to build relationships and let players know what he's about and how he can help. It's not just players, it's coaches as well, and all departments in our organization. He'll be in and out of town and he's a resource for everybody. Even from a distance, he's somebody that I can talk to or players can talk to."

While you're sittin around pondering what to do next. Think about someone who believed in you before you believed in yo'self. Then text 'em, email 'em, hell call 'em and tell them they changed your life.

Harden has already made an impact on Leafs captain John Tavares, who experienced a traumatic injury in last year's playoffs.

"Greg's been great in my recovery and getting back going here and my frame of mind," Tavares revealed. "He has a tremendous background and expertise. He's had a lot of success with a lot of teams and a lot of players, many different sports, many different levels, so looking forward to his insight and how he can better us as people and a group."

This will be a challenging season for the Leafs, who are looking to exorcise playoff demons while the pandemic rages on and the NHL returns to a gruelling 82-game schedule. Harden will be a big help.

"He's a straight shooter," said veteran forward Jason Spezza. "There's not a lot of beating around the bush. He's very direct and I enjoy talking to people like that. He can help us work through some of the sludge of the season that you get stuck in."

Harden's favourite phrase is: "Control the controllables." He has those words on his desk in a frame.

"As a player, you know, sometimes you get in your own mind," said gritty winger Wayne Simmonds, "and sometimes it's hard to get yourself out of it. When you have a professional helping you navigate the way through the mental game, it makes it easier."

Auston Matthews returned to practice on Tuesday. The star centre, who is recovering from off-season wrist surgery, skated with teammates for about 25 minutes, but left before the contact drills. And Matthews still isn't firing his shot like usual.

"In terms of him really pushing it with the shot and the torque that's associated with it, that's something that he's going to build toward and that's what he's going through now," said Keefe. "He looked good to me out there in terms of how he was moving and I know he was excited to be out on the ice with some of his teammates."

The expectation is that Matthews will follow a similar routine the rest of this week. There's still no timeline for his return to game action.

While the surgery has disrupted his ramp-up program, the hope is it will actually help Matthews build on his Rocket-Richard-Trophy-winning year.

"It was an amazing season he had," Keefe said, "and knowing that he didn't play many games where he was feeling 100 per cent, it's exciting to know that he's going to be feeling better when he gets back on the ice and playing for real again."

The NHL is instructing officials to apply a stricter enforcement standard for cross-checking this season. Will this benefit the Leafs?

"We think so," Keefe said. "Whether it's cross-checking or any of the other rules, if they're called at a high standard and it's consistent, that would benefit any team with high-end talent. It benefits the league and benefits the game. We'll have to see how that plays out and players will need to adjust. Certainly, we would like to have more power-play opportunities if they're warranted."

For the 2021-22 season there will be a tighter standard of enforcement for Rule 59 - Cross-checking.

The Leafs are 29th in power-play opportunities over the last four seasons.

"I guess it could help us," Simmonds said. "It could help other teams. I'm more looking for consistency. Make sure you're calling it by the book. Sometimes you hear they'll clamp down on things and as the season gets going, the longer we go, they kind of loosen up on it. You got to be consistent through the whole 82-game schedule and especially the playoffs."

Simmonds, who spends a lot of time around the net in the offensive zone, cracked a smile when first asked about the planned crackdown.

"It'll be nice," he said. "I've made a living taking lumber to the back. To be honest with you, I don't see how they'll be able to do it [for plays] in front of the net. It's just part of the game and just happens sometimes. The egregious ones, yeah, but sometimes there's just posturing there and the player on offence can use it as well."

"It's been good," the 21-year-old defenceman said. "Over the summer, I developed my body so it's been a good couple days so far. I've been getting older so hopefully that will help, too. I feel stronger and faster and more developed in my body overall."

Sandin trained in the summer with teammate and fellow Swede William Nylander. Did he pick Nylander's brain at all about taking the next step in his development?

"I'm not trying to take as much from his brain, to be honest," Sandin said with a grin. "I'm trying to develop my own and be the Rasmus way."