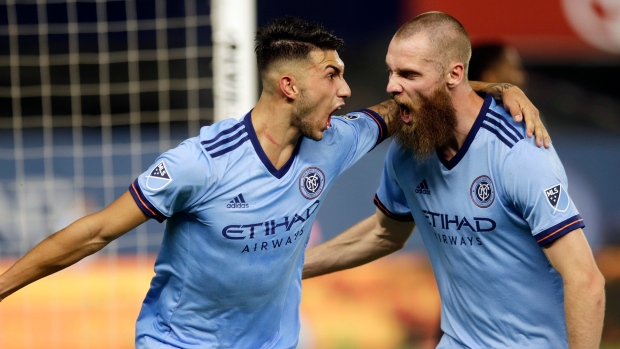 NEW YORK (AP) — Valentín “Taty” Castellanos scored his 19th goal of the season to give short-handed New York City FC a 1-1 tie with the Philadelphia Union on Sunday, clinching a home game in the first round of the MLS playoffs.

Fourth-seeded New York City (14-11-9) played a man down after 24-year-old Gedion Zelalem, who made his first start since 2019, was shown a red card in the 21st minute. NYCFC will play No. 5 seed Atlanta United in the first round.

Castellanos won the league’s Golden Boot award, besting D.C. United’s Ola Kamara. While they had the same number of goals, Castellanos had more assists (eight to Kamara's five). He went high in the air to side-net a header off an arcing ball from Maximiliano Moralez to make it 1-1 in the 53rd minute.

Kacper Przybylko scored with a one-touch finish from point-blank range to give Philadelphia (14-8-12) the 1-0 lead in the 26th minute.

The second-seeded Union will play No. 7 seed New York Red Bulls in the first round.