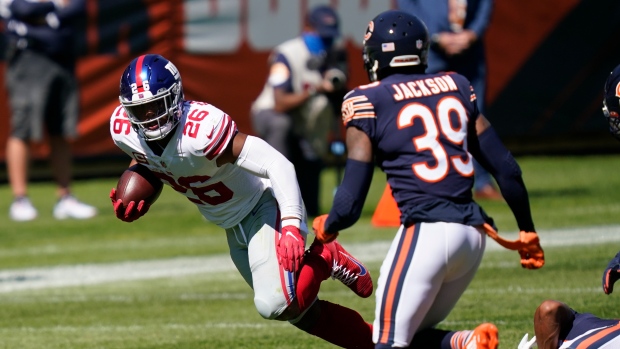 Barkley was carried off the field by trainers after a run early in the first quarter. He left the game against the Chicago Bears and appeared to be in serious pain.

The Giants said Barkley was undergoing X-rays on his knee. He will have more tests Monday to make a final diagnosis, the team said.

One source said a torn ACL was "certainly within the realm."

Barkley was hurt as he ran toward the sideline and was being tackled by Chicago Bears safety Eddie Jackson. He grabbed at the knee as he was headed to the ground.

Barkley was later carted to the locker room and slammed his fist in disgust. He had four rushes for 28 yards before exiting.

This came moments after Barkley was forced to miss a play when he landed on his left arm.

The Bears had their own running back issues. Running back David Montgomery tried to hurdle a lineman, was clipped and tackled with his head hitting the turf first. He went to the medical tent and then to the locker room.

The Bears said he had a neck injury, but he returned in the second half and received a bunch of carries down the stretch.

The Giants also lost wide receiver Sterling Shepard with a toe injury. He was hurt after catching a pass late in the first half as he was tackled by cornerback Jaylon Johnson.

Shepard tried to return in the third quarter, but could not finish his route on the first play of the second half. He finished with two catches for 29 yards.

So much for quarterback Daniel Jones getting all his top weapons healthy. Sunday was the first game that Jones had Barkley, Shepard, tight end Evan Engram and wide receivers Darius Slayton and Golden Tate all at his disposal. But it lasted only a little more than a quarter.

It has been a rough start to the season for Barkley and the Giants. Barkley rushed for 6 yards on 15 carries in the opener and was criticized publicly by former Giants great Tiki Barber for his blocking. Barkley was hit behind the line of scrimmage on 11 of the 15 carries, and had eight negative runs.

Barkley's first run again went for negative yards in Chicago, and the Giants trailed 10-0 when he left.

Barkley, 23, is in his third professional season after being selected with the second overall pick in the 2018 NFL draft. After a huge rookie season in which he accumulated more than 2,000 total yards from scrimmage, he was hampered by a high ankle sprain last year.

The Giants were expected to build their offense this season around Barkley, the talented back whom general manager Dave Gettleman considered a transcendent talent and future "gold jacket" player.

Information from ESPN's Adam Schefter was used in this report.