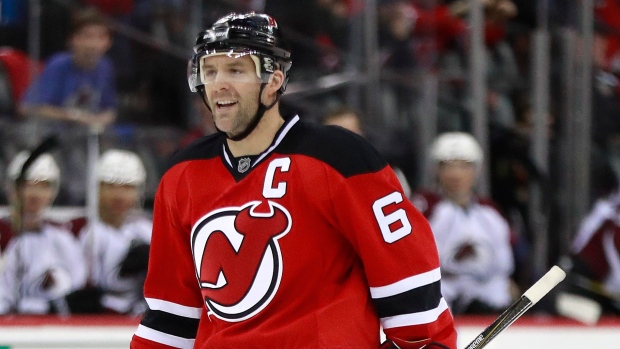 The Devils got young defenceman David Quenneville and the Islanders' second-round pick in the 2021 draft in return for Greene.

The deal came eight days before the NHL trade deadline on Feb. 24.

The Islanders have been searching for a quality defenceman since losing Adam Pelech to an Achilles tendon injury in pregame skate on Jan. 2 for a game against the Devils. It also gives them a lefty-shooting defender on a team filled with right-handed defencemen.

The deal reunites the 37-year-old Greene with Islanders president and general manager Lou Lamoriello, who signed him as an undrafted free agent out of Miami (Ohio) University in 2006.

New Jersey later traded forward Blake Coleman to Tampa Bay for 19-year-old left wing Nolan Foote and a 2020 first-round draft pick the Devils previously acquired from Vancouver. The deals give the Devils eight selections in this year's NHL draft, including three in the first round.

Greene, who is in the final year of a five-year, $25 million contract, had a no-trade clause and had to approve the deal. His 14 seasons in New Jersey, which included a trip to the Stanley Cup Finals in 2012, made him the Devils' longest-serving active player.

Devils interim general manager Tom Fitzgerald said he has talked to Lamoriello frequently over the past month.

“Lou is trying to help his team win right now,” said Fitzgerald, who has known Lamoriello since their days at Providence. “Andy is a guy that he obviously knows very well and feels very comfortable with him. We're in this situation where playoffs aren't in the picture for us.

Greene became a fan favourite in New Jersey for his steady play and shot-blocking ability. He has 49 goals, and 197 assists for 246 points in 932 games, which rank seventh on the Devils' career list.

Fitzgerald added he didn't take parting with Greene lightly, saying he consulted with the player throughout trade discussions.

Greene goes from a Devils team that sits last in the Metropolitan Division to the Islanders, who began Sunday holding the division's third playoff berth. New York dropped a 1-0 decision to the Vegas Golden Knights on Saturday night.

Fitzgerald said he will listen to offers for his players. Forward Wayne Simmonds and defenceman Sami Vatanen will be unrestricted free agents after this season.

“I am not telling anyone that this player or that player is off limits," said Fitzgerald, who took over when Ray Shero was fired in January. “I don't ask for anything. If someone wants to talk about one of my players that has a contract that's fine. Let me know."

Quenneville was selected by New York in the seventh round of the 2016 draft and has yet to match the offensive production he enjoyed in the Canadian juniors. He had 69 goals and 214 points in 250 games with Medicine Hat of the Western Hockey League.

Quenneville has spent the past two seasons splitting time between the Islanders AHL and ECHL affiliates. His brother John was a first-round pick by New Jersey in 2014 and is now a minor leaguer for the Chicago Blackhawks. They are both first cousins to Panthers coach Joel Quenneville.

Coleman had 21 goals and 10 assists in 57 games for the Devils this season. For his career, the 28-year-old has totalled 57 goals and 37 assists in 237 games over parts of four seasons in New Jersey.