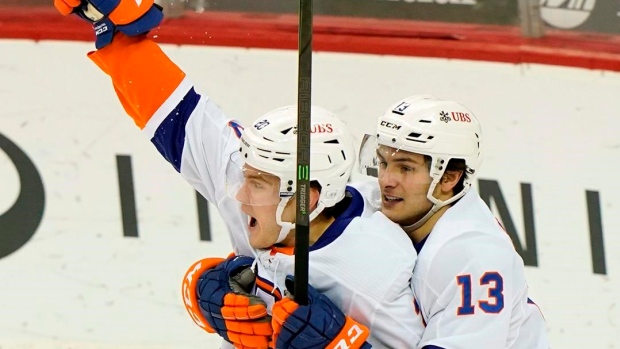 NEWARK, N.J. — The New York Islanders are so hot they are even winning games they seemingly lost in overtime. In contrast, the struggling New Jersey Devils can't catch a break.

The Devils thought they had won the game 27 seconds into overtime on a goal by P.K. Subban, but a lengthy review showed Jesper Bratt was offside.

“I mean you’re thinking the game’s over and then you get the hold up call, and they started to take a look at it,” Islanders centre Brock Nelson said. “Our video guys are calling down saying they’re pretty sure it’s offside so it’s game changing, obviously, and gives us some life.”

The Islanders were a shootout save away from losing when Beauvillier and Walhstrom keep the NHL's longest-current winning steak going by beating Scott Wedgewood, Beauvillier tied the shootout with a shot off the iron and Walhstrom ripped one past the goaltender for the win.

New York extended its point streak to 11-0-1 and now leads the NHL with 42 points.

“I thought a really huge goal by Beauvillier when the pressure is on you,” Islanders coach Barry Trotz said. “If you don’t score, game over, you get that goal and keep yourself alive and then obviously Wahlstrom getting the winner. Not the prettiest, it was drawn out ... the longest 60 minute game we’ve had in a while, that’s for sure.”

Nelson and Kieffer Bellows scored in the first period for the Islanders,. Rookie Ilya Sorokin made 29 saves, allowing only Nikita Gusev to score in the shootout.

New Jersey coach Lindy Ruff said it was tough game for his players. They had a third-period goal taken away because of an iffy interference call on a faceoff and then had the OT goal waved off.

“So, yeah, it’s got a different feel to it for sure,” Ruff said of the loss. "And, you know, there’s ways that we could have been better, but there’s still a lot where I feel the pain the players are going through.”

Janne Kuokkanen and Yegor Sharangovich scored for New Jersey, while Wedgewood made 32 saves.

Devils centre Pavel Zacha, who missed the Devils' final shootout attempt opening the door for Wahlstrom, said the feeling in the locker room was not great.

“We had some good looks and four on three in overtime and the offside in overtime,' he said. ”You want to win games like that.”

Sharangovich tied the score 2-all with less than four minutes left in the second period on a shot from between the circles following an Islanders turnovers.

Nelson had given New York a 2-1 lead with :01 left in the first period with a shot from the boards that found it way through four players into the net.

Bellows, who scored the game-tying and winning goals in a 3-2 win on Saturday, opened the scoring at 4:18 when a shot by late addition Sebastian Aho went off his arm past Wedgewood.

Less than a minute later, Kuokkanen tied it, putting the rebound of Damon Severson's shot into the net. It gave the Finnish rookie goals in four straight games, and five for the season.

The start of the game was delayed because of a lineup problem. Noah Dobson was supposed to play, but was a late scratch after being added to the COVID-19 protocol list. Aho got dressed and quickly picked up an assist in his first game of the season. Earlier, Jean-Gabriel Pageau was placed on the CIVID-19 list. Austin Czarnik centred a line with Leo Komarov and Wahlstrom.

Trotz said the Islanders never considered not playing because of the late COVID report on Dobson.

Islanders: At Washington on Tuesday in meeting of the top two teams in the East.