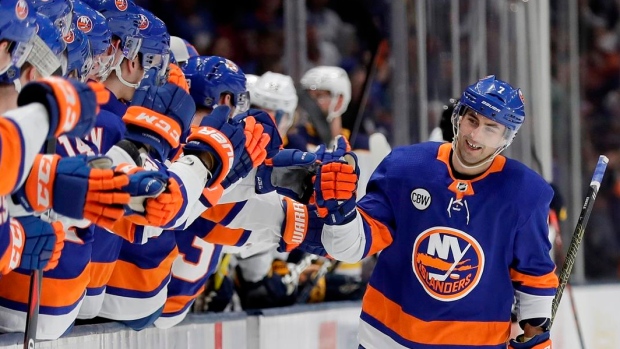 Jordan Eberle calling free agency a "last resort" must be music to the ears of the New York Islanders and their fans after what happened a year ago.

Eberle on Friday agreed to terms on a $27.5 million, five-year contract that counts $5.5 million against the salary cap. Unlike former captain John Tavares, who left for Toronto last summer in free agency, Eberle decided to commit long term to the Islanders much like teammate Brock Nelson did recently.

"I like the direction the Islanders are going," Eberle said. "From day one, my mindset was to try and get a deal done."

Under 2018 Stanley Cup-winning coach Barry Trotz, the Islanders without Tavares made the playoffs and reached the second round. Eberle conceded he had an up-and-down season, but by the time his found his scoring touch early in the playoffs he figured he wanted to return.

"I found my niche within the team," Eberle said.

After re-signing Eberle and Nelson, general manager Lou Lamoriello still has captain Anders Lee and goaltender Robin Lehner as pending unrestricted free agents. Eberle said he talks to Nelson but won't try to launch a full-out campaign for him to stick with New York.

"Ultimately it'll be up to his decision," Eberle said. "Anders is on his own path. No one can really blame him for taking his time or going to free agency. He's earned the right to that."

Eberle, too. But after seeing what the his team could do and how the St. Louis Blues went from last in the NHL to winning the Stanley Cup, he's ready to bet on the Islanders contending for a title during this contract.

"I'm not a young buck anymore. I'm 29, and definitely winning becomes more of a priority," Eberle said. "We have as good a chance as anybody, in my opinion."