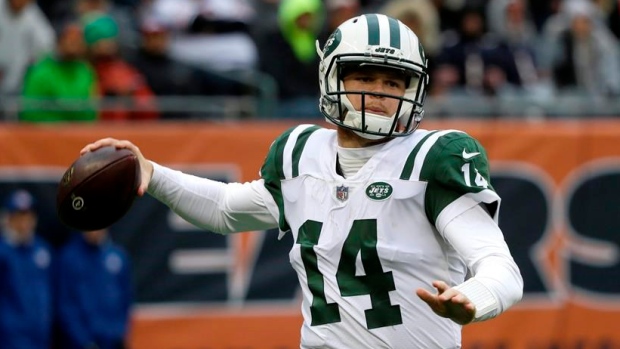 FLORHAM PARK, N.J. — Sam Darnold recently made a mistake that drew the ire of Adam Gase. It was the first time the New York Jets coach raised his voice at his young quarterback.

Darnold didn't flinch. At all.

"He was like, 'It's about time you started getting on me a little bit,'" Gase recalled with a smile.

Darnold turned 22 years old Wednesday — a baby by NFL standards — but Gase doesn't feel any need to treat him with kid gloves.

"You can say whatever you want to him," Gase said with a smile. "He's great about that. I think he likes it better when you're a little aggressive with him."

Add that to the ever-growing list of things Gase already appreciates about Darnold as the QB guru and the franchise QB develop a working relationship they both hope will grow stronger for many years.

Darnold is still learning the nuances of Gase's playbook after being in Jeremy Bates' system last year. Gase uses a walkie-talkie to call plays into Darnold's headset during practice, trying to help the quarterback get used to his voice and feel comfortable with it long before the season starts.

The two also constantly speak in person and away from the practice field, breaking down plays and finding out what works best for them. Not that Darnold has asked Gase to adjust any elements of the playbook just yet.

"No, nothing drastic like that," Darnold said. "I think, for us, it's more conversations like, 'Oh, that felt a little awkward,' or, 'I don't know how I feel about that.' I'm never going up to him like, 'Hey, that's not part of the offence. We can't do that.' I'm not there yet. But, it's definitely conversations that we have where it's like, 'OK, maybe I don't do that so well.'

"But again, there's room to grow. There's always room to grow for me. I feel like I have so much room where I can get better."

That was reiterated to Darnold during the first minicamp practice Tuesday when he was intercepted twice during team drills. New defensive co-ordinator Gregg Williams was typically aggressive with his squad, frustrating Darnold at times.

That, Gase insisted, will only help Darnold and the rest of the offence.

"It's a good process for us," Gase said. "It's tough going against Gregg's defence where you get multiple looks. We threw in some new stuff on the offence and there's some growing pains there. But that's part of the process, it's good stuff for us to have to go through."

Gase is excited about having a quarterback at this stage of his career with Darnold's physical abilities and mental capacity. The coach, who has worked with the likes of Peyton Manning, Jay Cutler and Ryan Tannehill, has raved about Darnold's maturity and businesslike approach on the field and in the classroom.

A year ago, Darnold was a rookie simply trying to figure out life in the NFL. Darnold's teammates have noticed a difference in the quarterback this spring.

"Confidence, honestly," left tackle Kelvin Beachum said. "It's been great to just see him being able to command the huddle and understanding the urgency that goes along with each particular drill. ... I'm excited to see what he has once the (season) gets going."

Darnold agreed that he is feeling more comfortable and confident — despite the fact he'll be running his third different offence in as many years, dating to his final season at USC.

That doesn't faze him, though. Not in the way it might for many young quarterbacks.

"I think I'm all right at kind of being able to separate things," he said. "So, whether it was at USC or last year, I'm very good at just kind of putting stuff behind me and just moving on to the next offence. I feel like I'm the same way on the field - if a bad play happens, I'm able to move on to the next play.

"I think there's definitely a process there, though, where you've got to erase some stuff out of your memory bank."

Darnold's final numbers in his first season were far from eye-popping: 2,865 yards, 17 touchdowns, 15 interceptions and a 57.7 completion percentage in 13 games. It was what he did in the final four contests, though, that had everyone feeling good about the No. 3 overall pick heading into his sophomore year in the NFL.

Darnold came back from a foot injury that sidelined him for three games and closed the season by going 80 of 125 — 64.0 completion percentage — for 931 yards with six touchdowns and only one interception.

Even more impressive than the stats was how Darnold showed an ability to make plays when it appeared there were no plays to be had.

The Jets have four more sessions of organized activities next week before they break until training camp in late July. Darnold plans to spend some of his vacation time on the field with some of the guys he'll be working with when the season begins.

"Yeah, I think it'd be good to get some teammates wherever we can meet up, whether I'm on the East Coast, whether they come out to the West Coast," Darnold said. "But yeah, definitely after OTAs I'm going to be going back home for a little bit — spend time with family and friends. But definitely looking to meet up with some of my teammates, especially receivers, running backs, skill guys, to be able to get that rapport with them in terms of route running and timing.

"So, I'm sure one weekend or during the weeks at some point, we'll get some time together."