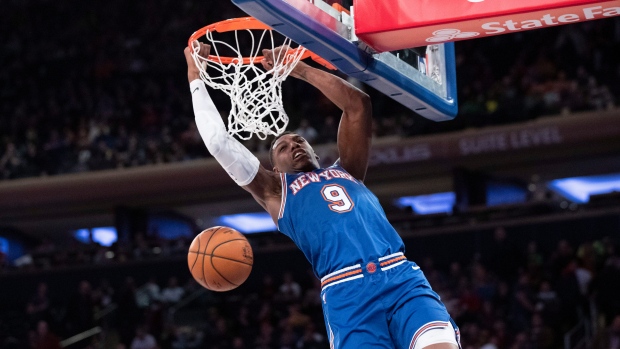 Canadian RJ Barrett left Thursday's game against the Phoenix Suns and did not return after turning his ankle in the third quarter.

Barrett rolled his ankle badly and fell hard after being fouled by Phoenix's Ricky Rubio on a drive to the basket. The 19-year-old gathered himself and was able to shoot the free throws, but was removed from the game soon after walking with a noticeable limp.

He was ruled out for the game shortly after. Phoenix went on to win handily 121-98.

According to multiple reports, Barrett was seen on crutches with his ankle heavily tapped in the locker room.

"It hurts. I don't know, man. I've never really been hurt before," he said after the game, adding he will be re-evaluated on Friday.

In 14:10 of action before departing, Barrett had seven points, three rebounds and two assists.

The rookie has appeared in 40 games so far this season for the New York Knicks, entering Thursday's showdown at 14.3 points per game on nearly 40 per cent shooting.

Following their loss to the Suns, New York will be back in action Saturday night against the Philadelphia 76ers.