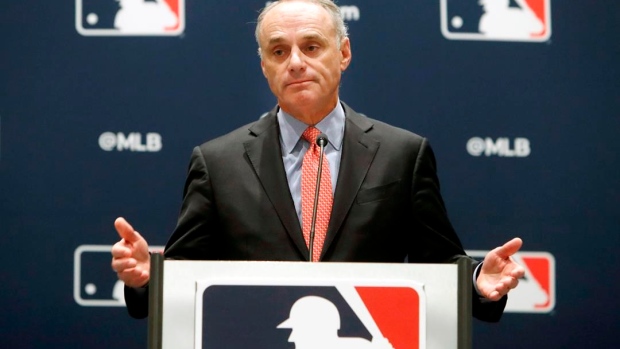 At least 10 players from the Brooklyn Cyclones and Jersey Shore BlueClaws wore the wristbands — which feature the hashtag #FairBall — during their High-A game in New York. The demonstration was organized in part by Advocates for Minor Leaguers, which also handed out the wristbands to fans and distributed pamphlets detailing the financial issues faced by players.

“Minor League Baseball players have been severely underpaid and silenced for decades,” players from both teams said in a joint statement released by Advocates for Minor Leaguers to The Associated Press. “Today, we are wearing #FairBall wristbands to show our solidarity with every fan and ally who is working to change that. We love the game of baseball, but it needs to evolve. It is time for every minor leaguer to be paid a living wage.”

High-A players make a minimum of $500 per week and are only paid during the roughly six-month minor league season. While some players get signing bonuses worth hundreds of thousands — even millions — of dollars upon entering pro ball, many sign for as little as $1,000.

The financial burden has prompted players to sleep on sofas, air mattresses or floors in overcrowded apartments, play with tattered equipment, and seek charity from fans and more fortunate teammates.

“The players who donned wristbands in Brooklyn today will make less than $12,000 this year,” Advocates for Minor Leaguers said in a statement to the AP. “The MLB teams they play for are worth well more than $2 billion. There is absolutely no excuse for this. We are proud of these players for standing up for themselves and each other. Their message should be heard loud and clear across the industry: it is time to pay minor leaguers a living wage.”

Advocates for Minor Leaguers said Saturday night it had volunteers handing out wristbands and pamphlets to fans outside minor league stadiums in Georgia, Iowa, Nebraska and California, along with Brooklyn, which had the only on-field player protest with the wristbands. The pamphlets suggest that MLB teams extend pay to players during the offseason and provide players with housing and three meals a day during the season.

While major league players make a minimum of $570,500, players with minor league contracts are not part of the Major League Baseball Players’ Association. Prior to this season, players at the lowest levels of the minors made as little as $4,800 per year. Garrett Broshuis, co-founder of Advocates for Minor Leaguers, has said he would like minor league players to eventually form their own union.

Major League Baseball raised minor league salaries in 2021, with full-season minor leaguers earning between $12,000 and $16,800 per season. The federal poverty line is $12,880 for individuals.

The raise came amid a shakeup of the player development pipeline that included chopping the affiliated minors from 160 to 120 teams.

“We are seven months into a significant change that aims to address longstanding issues that have impacted minor league players," MLB said in a statement to the AP. "Improving the working conditions and pay for minor leaguers is among the chief goals of the modernization of our player development system.

"Player salaries and working conditions are unequivocally better than they were under the previous structure. While more work remains, enormous strides have been taken by increasing salaries from 38-72% for 2021, improving facilities, providing more amenities and better clubhouse conditions, and reducing in-season travel with better geographical alignment.”